Painful weekend of border delays from UK into France

LONDON (AP) – Truck drivers and travellers seeking to cross from the United Kingdom (UK). into France faced major disruptions and long waiting times for a third day on Sunday on the weekend that kicks off the summer holidays for many British families.

Huge lines have formed since Friday at both the Port of Dover for those taking car ferries across the English Channel and in nearby Folkestone on roads leading to the Eurotunnel that goes under the Channel to France.

Eurotunnel said drivers were still facing a wait of at least 90 minutes to check-in for the railway shuttle on Sunday.

Still, congestion at the port had eased somewhat compared to the last two days, when it took several hours to clear a miles-long backlog of traffic as tens of thousands of people went on vacation along with a large amount of cargo trucks.

Since Britain left the European Union (EU) in 2020, UK travellers face stricter border checks when traveling to the continent. At Dover they are performed on the English side of the channel by French staff.

British officials and politicians have blamed the chaos on staffing shortages at French border posts, an accusation denied by the French. 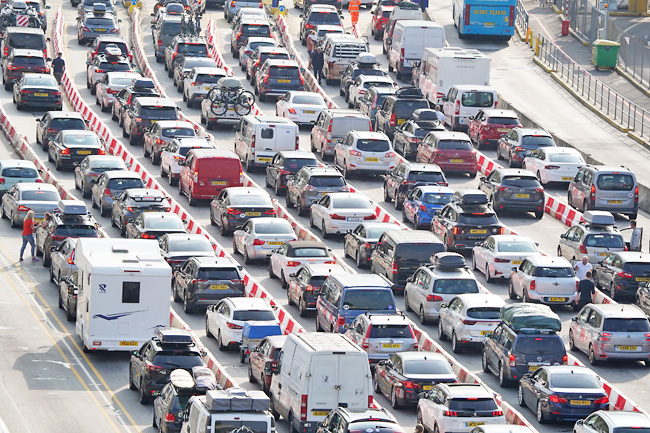 The Port of Dover said the checkpoints were “fully manned” on Sunday and as of Sunday morning, 72,000 passengers had been processed over the long weekend.

The port’s Chief Executive Doug Bannister said he was grateful to “everyone who has turned this situation around”, including both French and British authorities.

He added it had been an “incredibly challenging” few days and thanked both passengers and the local community for their patience.

Angie Emrys-Jones said she and her family spent 11 hours on Saturday in the queue for the Eurotunnel, joining the line at 5.30am and boarding at 4.15pm. She said there were “rows and rows of standstill traffic as far as we could see”.

Natalie Chapman of the trade group Logistics UK said some truck drivers had endured waits “in excess of 18 hours” on Saturday. “You used to, prior to Brexit, just wave your passport and they may or may not be looked at. But now everyone is checked and stamped.”