United by a single passion and tied by a common interest, the discipline of Spartan racing – officially termed as obstacle course racing (OCR) – not only tests a person’s mental and physical state to the fullest but also educates oneself on life’s values and principles.

As a saying goes, “You’ll never understand something until you experience it”. This could not be more accurate a way to describe what it’s like when it comes to joining an obstacle course racing for the first time.

The Spartan Race Stadion 2022 at the Sultan Ibrahim Stadium in Johor, Malaysia took place only a few days ago but the memories, moments and everything in between will long live with me for the rest of my life.

In life, there are rare occasions heightening your senses such as graduation, marriage, having your first born, and so on, and for me, completing a Spartan race definitely falls under it.

Founded by Joe De Sena, a Spartan race involves various categories such as ‘Sprint’, ‘Super’ and ‘Beast’ with a specified number of obstacles or challenges requiring a great deal of strength.

It is a rapidly growing industry complemented with a huge following of all ages across the world, especially in the Southeast Asian region.

The world of obstacle course racing did not really enter my thoughts when I was asked if I was interested to join awhile back. 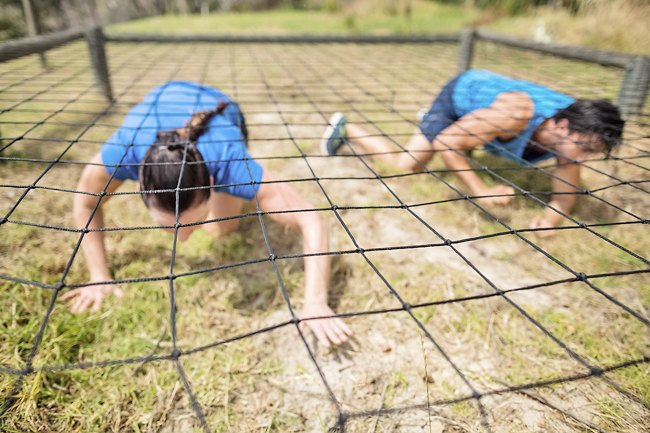 Even though I have been aware of the popularity of the sport, with Bruneians making their presence known with commendable achievements, like any other mainstream or niche sport I didn’t picture myself taking part.

Since embarking on a weight loss journey and achieving my goal, I have been training regularly to ensure my fitness level is in top condition, but it was not geared towards competitions.

After achieving my desired weight, I felt a sense of urgency in building my strength to continue and step up my fitness journey. So, I needed a fresh challenge and swiftly confirmed my interest to join the Spartan event a day after I was asked.

Although I have no experience in obstacle course racing or in ever attempting most of the obstacles typically associated with the sport, I was familiar with the kind of strength needed based on my routine training sessions.

The constant quest for progress and enhancement in my level of fitness spurred my interest to test myself in new boundaries and push myself to new limits.

In the build-up leading to the race, I attended a class specifically targetted to obstacle course racing such as ring transfer, monkey bar, Herculean Hoist and rope climb. I also went for OCR training to prepare myself both mentally and physically a week before the actual day. To be able to clock half an hour for a three-kilometre (km) distance inclusive of a variety of obstacles helped gauge the level of readiness ahead of the race.

The days leading up to the competition also saw me step up my cardio training by juggling between a treadmill and a bike before attending a circuit training class once a day.

Prior to joining the race, I had been constantly seeking and exploring new disciplines, having considered the crafts of kick-boxing, rock climbing, Muay Thai and others.

During the early morning, I would run 5km in training where I would regularly burn around 350-380 calories per session.

The Spartan adventure that has occupied my mind since registering for the event would not have been possible without my travelling group and companions. Aided by a shared passion for fitness, my companions’ past experience and knowledge in obstacle course racing served as comfort and eased any concerns whilealso helped me on any queries.

The togetherness and camaraderie in knowing that we were all competing for the same cause and going through the same journey together contributed immensely in making the event a momentous and worthwhile experience.

When the day finally arrived, the excitement that had been built up for as long as I could think of reached new heights and admittedly a few nerves kicked in as the Sultan Ibrahim Stadium – the venue for the event – came into view.

To wear the red headband bearing the Spartan logo and the white bracelet indicating that you are a Spartan competitor felt almost surreal but it was only the start of more things to come.

As I got onto the starting line along with other competitors in my age group, the nerves started to disappear as I focussed on completing the race, just as I had approached any class back in Brunei.

The first two obstacles were climbing the four- and five-foot walls which I successfully passed despite the doubts that lingered through my mind for as long as I could remember.

I remember clenching a fist in delight before going through a 2.5km run that involved walking up and down a flight of stairs of the iconic Sultan Ibrahim Stadium.

I was in awe as soon as I entered the stadium and running through the blue carpeted surface with the giant screen as a backdrop was an unbelievable experience. After running to the top floor, we were instructed to carry a large water bottle on both hands right back to the ground floor using a staircase and then back a flight of stairs again.

Once that was over, three successive obstacles greeted me which were the slam ball, barbed wire crawl and the jump rope.

So far at that point, no burpees – a penalty if a participant fails to complete an obstacle – were required but the level of difficulty was raised once we exited the stairway run segment of the race.

That clean record of passing every obstacle ended once I failed my first obstacle in the Z Wall when I slipped, undesirably leading to my first set of burpees (15 repetitions for each set), though I felt that I could have worked on my balance.

Before the race, I had set myself a target of minimising the number of burpees and completing as many obstacles as I could.

I was personally disappointed not to have completed the monkey bar and multi-rig obstacles, though I was close on the latter with only two rings left before my body gave way as it swung too much.

But I was surprised to complete the Atlas Carry obstacle – which requires a competitor to lift and carry a heavy round stone weighing approximately 100 pounds – despite my past struggles of lifting a 30kg medicine ball during my classes in Brunei.

The next obstacle required us to carry a sandbag for a distance of 200km before proceeding to a rolling epic obstacle, which required us to roll from one end to another to prevent ourselves from being in contact with barbed wire.

Then all of a sudden, as the race reached the 4km mark, I could not fight back my tears which started to flow while in the middle of running.

I still remember fondly the moment where my vulnerability and fragility showed as I navigated my way into the basement parking of the stadium, with the finishing line in sight.

It was something I had not experienced as I let my emotions get the better of me, recognising that my efforts, not just during my training sessions but the two years that I went through during my weight transformation and fitness journey, had finally reaped its rewards.

Perhaps another surprising moment was being able to wrap my legs around the rope using the J method during the rope climb obstacle, even though I didn’t get to ring the bell, which is well-known in Spartan racing.

After going through the Hercules Hoist and Para Cord obstacles, I crossed the finish line in disbelief as I was greeted by my fellow Bruneians who shared my undulating joy.

To have the finishing Spartan Sprint medal wrapped around my neck by one of the volunteers was indeed a special moment.

My ranking – 24th out of 68 entries in my age group – was not something I targetted in the first place, but the fact I had completed a world-renowned race left me with an indescribable feeling.