Over one tonne of rubbish collected at beach clean-up

The campaign, part of BGC’s Clean Rivers, Clean Seas initiative, marked its eighth beach clean-up this year, in support of the world’s largest single-day volunteer effort to clean up the Earth’s beaches, lakes and rivers under the International Coastal Cleanup Day.

BGC’s message through the initiative is that environmental protection is everyone’s responsibility and they are committed to playing their part in sustaining the environment for the coming generations, while encouraging the public to ‘go green’ and stop plastic use, as a massive volume of plastic garbage contributes to the overall pollution in oceans and seas, posing a growing threat to marine life.

“With the launch of BGC’s Clean Rivers, Clean Seas campaign earlier this year, we are honoured to continue to support the Brunei Climate Change Secretariat’s national agenda, by raising awareness on the importance of preserving our coastal environment, eliminating waste pollution and threats to marine life,” he said.

He added that BGC believes that the coastal clean-up campaign is an integral initiative which helps instil awareness on the impacts of human activities on the environment.

The managing director also emphasised on the importance of raising awareness on the contribution of human activities to waste pollution, which threatens both marine life and human beings. “The repercussions are major. We recommend everyone to bin their rubbish. Even if the bins are full, be responsible and take it home to throw into your own bins.”

BGC has also been working with schoolchildren, as the company believes it IS imperative that they gain exposure towards the severity of waste pollution at the beach. 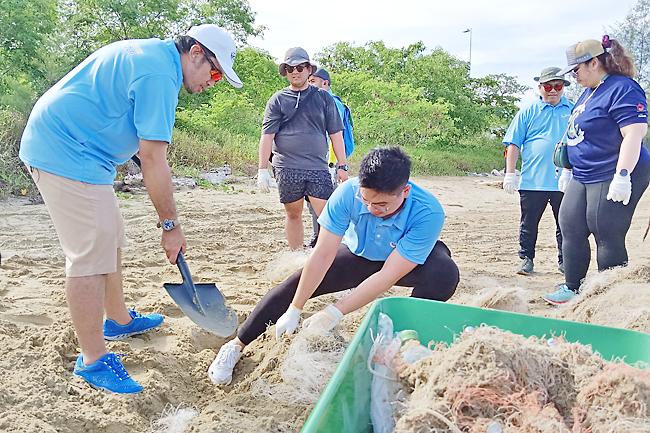