DOHA, QATAR (AP) – Qatar on Wednesday unveiled a 6,000-cabin fan village in an isolated lot near its airports, an offering for housing toward the lower end of what’s available for the upcoming World Cup just days away from starting.

As journalists toured the cabins, desert winds kicked up sand at the 3.1 square-kilometre site, which housed a metro station, a bus stop, and a planned temporary restaurant and convenience store. The area could in theory hold as many as 12,000 people if booked at capacity, officials said.

Artificial green grass coveredare the walkways outside, with common areas filled with large bean-bag style chairs under a grey sky on Wednesday.

Competing nations’ flags flapped in the strong desert wind, a large screen also present at the site for fans to watch matches. Workers milled about the site, checking on its final touches.

The brightly coloured cabins, each with thin walls, are designed to hold one or two people with twin beds, a nightstand, a small table and chair, air conditioning, a toilet and a shower inside. 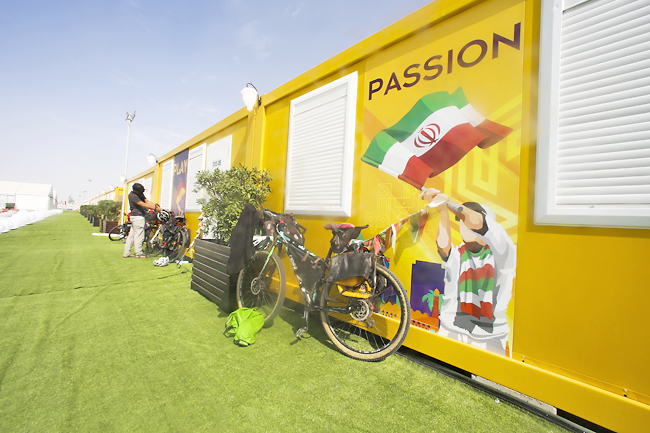 Those staying at the fan village can expect a 40-minute commute to stadium sites.

“Most of the fan(s) they prefer if it’s not a hotel, they prefer the apartment and villa,” al-Jaber said, noting those options are managed by French hospitality company Accor.

However, those wanting budget accommodation will come to this site and the other for cheaper options, he said.

In the lead-up to the tournament, concerns about hotel room space and high prices for the rooms available have trailed Qatar, which lacks hotel capacity for all teams, workers, volunteers and fans at the World Cup. So Doha has created camping and cabin sites, hiring cruise ships, and encouraging fans to stay in neighbouring countries and fly in for games.

Qatar has estimated it will have 130,000 rooms per day for the tournament.

Already, nearby Dubai in the United Arab Emirates has planned for an influx of World Cup fans who want to stay there where their money may go further.

“Now, the shuttle flights option, it’s one of the options for the people who stay already in our neighbour countries and… they would like to just to spend a day to attend the match,” al-Jaber said. “So this is a good option for them in a state of their case.”

He added, “If they would like to come and stay, they are more than welcome, of course, and there is many, many options for them.”

“We have enough accommodation and people still they can come and enjoy the tournament and of course they can choose what they are looking for from the accommodation,” he said.