THE WASHINGTON POST – “What I have written is an odd kind of memoir, notable – if at all – for what has been left out.” There are no spoilers in the closing words to Unsolaced: Along the Way to All That Is, Gretel Ehrlich’s latest collection of interconnected essays. While Ehrlich may regard it as “odd”, the reader has no way of knowing what is missing. What remains is a lovingly observed account of the lives of people, animals and the landscapes that sustain them, spun together as deftly as a spider’s web, filled with purpose and urgency.

When Ehrlich was 29 she travelled from her home in New York City to Wyoming to shoot a documentary about shepherds. Her creative partner was to have accompanied her, but he was diagnosed with cancer and died while she was away. Instead of attending his funeral, Ehrlich stayed in Wyoming, becoming both a rancher and a writer, travelling often but always returning to the place that afforded her solace.

In her 1985 memoir The Solace of Open Spaces, Ehrlich wrote, “I couldn’t make myself leave… The vitality of the people I was working with flushed out what had become a hallucinatory rawness inside me… The arid country was a clean slate. Its absolute indifference steadied me.” Now in her 70s, Ehrlich provides a bookend to this early memoir in which the notion of place providing solace is suspended, expanded, queried.

Ehrlich’s ranching career ended in 1991 when she was hit by lightning. Returning to her parents’ home in California, she had to piece herself back together. When she recovered, she began to travel again. To Wyoming – of course – Hawaii, California, Zimbabwe, Greenland and Kosovo, and in her restless movement between extremes a new vision of open spaces emerges. 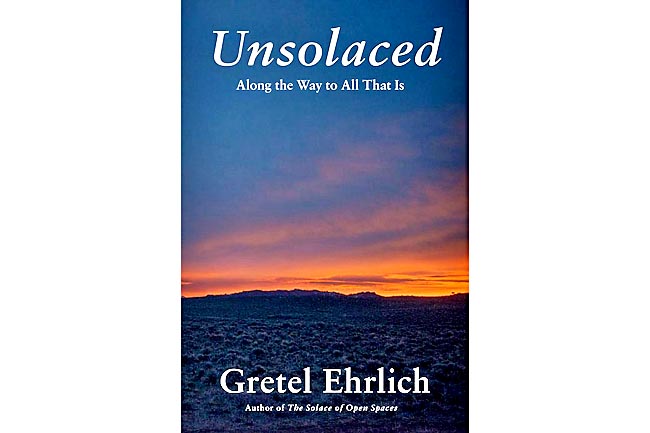 Ehrlich documents long friendships forged over many years in the far-flung places of the Earth. Climate change – which for most of us remains an awkward political abstract, one that sits uneasily with contemporary democracy’s need to measure the future in digestible four-year chunks – provides a visceral concrete backdrop to her narrative. Yet Unsolaced also challenges our contemporary preoccupation with looking to the future at the expense of living in the present. This constant rebalancing of contradictions defines Ehrlich’s narrative.

When Ehrlich was ranching, alone, she was surprised to find she could “tie the baling twine with a loop at the top to hang on the wagon’s stanchions while simultaneously keeping track of thoughts”.

Her friend Malcolm Margolin reminded her, “Our responses to Earth are dug in deep and are old. We aren’t new to what we do and know. The old ways are embedded in us.”

Inward and outward lives are enmeshed. This vision is comforting. Yet everything is in flux. When Ehrlich takes us away from Wyoming, the vision begins to fall apart.

Ehrlich recalls her first visit to Greenland in 1993. “In those days before the climate heated up, the ice came in mid-September and for nine months it was possible to travel and hunt on the frozen sea.”

She describes a traditional Ice Age way of life, in which elite marine-mammal hunters wearing skins and riding dogsleds provided food, tools and clothing for their community using methods passed on for 5,000 years. By 2002 this way of life was disappearing, because the ice was melting. An anguished hunter from Qaanaaq said to Ehrlich, “What is it that I’m going to tell my children? Everything I know has to do with ice. Now I will have nothing to teach them.”

Instead of living the hunting life on dogsleds, “they were becoming electricians, cooks, helicopter pilots, nurses, or teachers”.

There was a time when the colonial Western reader would have seen this shift in vocation as “progress”.

Ehrlich presents it as unmitigated catastrophe. Her friend Jens told her, “We had everything here… We could live any way we wanted, and we chose this. We like it this way, we can feed our families, and no one tells us how to live. Now I don’t know what’s going to happen. If the ice doesn’t come back, it will be a disaster.”

Ehrlich counterpoints the vision of a Greenland where dogsleds slip through melting ice with the tumultuous landscape of Zimbabwe, where the shifting climate is propelling mass extinctions. Where animals fail, people will fail, as both are dependent on the same dwindling resources. Paramilitary groups flourish in such an environment, redistributing by force that which is left. But there are other, more peaceable ways.

Ehrlich began her Zimbabwean narrative 15 years ago in the company of Allan Savory, then age 70, who taught regenerative farming at the Africa Centre for Holistic Management, “an unlikely oasis of calm, self-sufficiency, and plenty in a country on the brink of famine, death from disease, drought, and political chaos because of an out-of-control dictator”.

The imperative to restore regenerative-farming methods exploded onto the European agricultural scene in 2020, though other factors – including disease and political chaos – have largely drowned the voices of its champions.

Savory, ahead of his time, was a balm to growers in Europe and America alienated by calls to adopt aggressive conservation techniques that rid the land of their habitat-destroying sheep and greenhouse-gas-emitting cattle. Savory advocates managed grazing. That is, keeping fewer animals and moving them often. The grasslands can then regenerate, and the earth is never packed so hard that the rain, when it comes, runs off the land instead of into it. A return to sustainable living. “Every blade of grass counts if we are to survive,” Ehrlich wrote.

Ehrlich’s global nomadism and her linking of disparate ecologies conceal a carefully constructed thesis. The plains of Wyoming were formed when the glaciers melted at the end of the last Ice Age. Might Greenland one day resemble Wyoming? Is the destruction of humanity inevitable? Ehrlich is “trying to find a place to live where, as temperature increases, I will be able to find water, grow food, feed animals”.

No longer seeking solace, her imperative has become survival. Laying out a map of the world, she sees immediately that her choices are limited. “Yet I have a choice,” she observed, aware, already, that many do not. As a species, our options are narrowing rapidly – yet for some of us they do still exist.