One long eulogy to Chadwick Boseman

THE WASHINGTON POST – From its frantic opening moments, Black Panther: Wakanda Forever announces its intentions. Princess Shuri (Letitia Wright) is desperately trying to save the life of her brother, King T’Challa (the late Chadwick Boseman), checking his vitals by way of Griot, her personal artificial intelligence aide, and worriedly making micro-adjustments until her mother, Ramonda (Angela Bassett), arrives to deliver the dreaded news, “Your brother is with the ancestors.”

Thus does Wakanda Forever address, head on, the tragic loss of Boseman, who died of colon cancer in 2020. In a fitting tribute, the shuffle of iconic characters that opens every Marvel movie here is composed entirely of images of Boseman, a moving encomium to a gifted and charismatic actor who left the stage much too soon.

The next scene, a solemn memorial rite in which Shuri, Ramonda and hundreds of other Wakandans pay homage to their leader dressed in funeral white, underscores Boseman’s loss, not only to the franchise that he anchored with such assured command but to an audience primed to have its own grief acknowledged and shared.

So far, so classy. But it turns out that the rest of Wakanda Forever will be one long eulogy as well, with the next two hours toggling between overbusy storytelling and coping with sadness and loss. Wakanda Forever winds up feeling hopelessly stalled, covering up an inability to move on by resorting to repetitive, over-familiar action sequences, maudlin emotional beats and an uninvolving, occasionally incoherent story.

That narrative, co-written by director Ryan Coogler and Joe Robert Cole, puts Ramonda on the throne as queen of Wakanda, which apparently holds the world’s sole reserve of the all-powerful metal vibranium. When we catch up with Ramonda a year after her son’s home-going, she is imperiously refusing American and European entreaties to share (ie, control) the wealth, “not because of the dangerous nature of vibranium, but because of the dangerous nature of you”.

Meanwhile, a cache of the valuable ore is discovered in the Atlantic Ocean, where a mysterious tribe of feathered, fishlike creatures defends it with a combination of mesmeric powers and fierce fighting spirit. 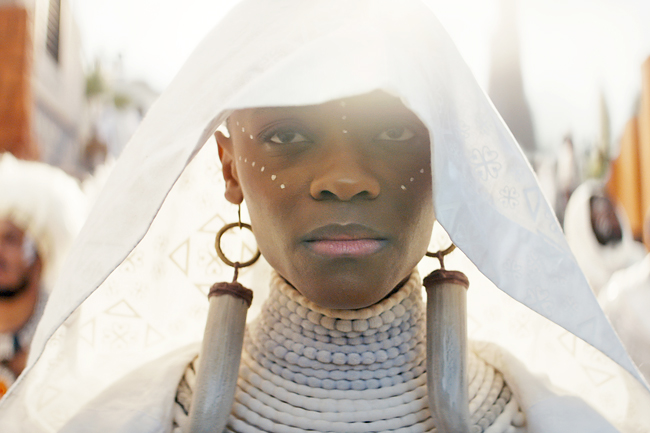 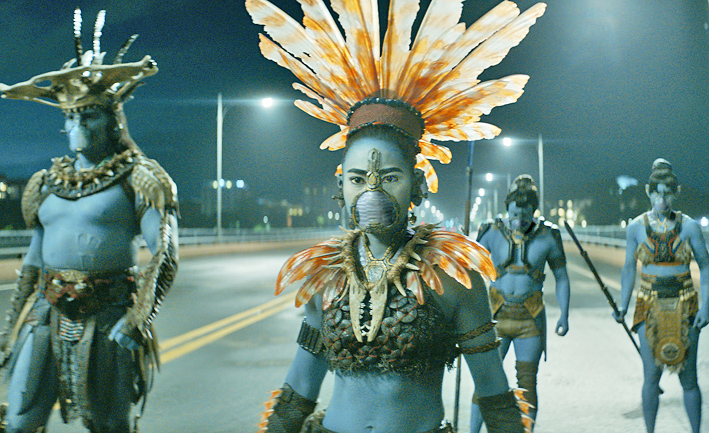 Who are these strange blue-skinned beings, if they’re not extras from the set of Avatar? All will be revealed in a film that travels from Wakanda, Haiti, Mexico and CIA headquarters in Virginia to the campus of MIT, which Griot describes as “the equivalent of a Wakandan village school”.

Eventually, we’re introduced to the leader of the amphibious army, which hails from an undersea kingdom called Talokan, ruled by Namor (Tenoch Huerta Mejía of The Forever Purge), who approaches Ramonda and Shuri with an offer to join forces against the Western colonisers they all have reason to mistrust.

As in the first Black Panther, the visual elements of Wakanda Forever are first-rate, with production designer Hannah Beachler and costume designer Ruth E Carter once again diving into nature, history, Afro-futurism and mystical tradition to create a lexicon of textures and adornments that feel simultaneously ancient and visionary.

The female troops led by Okoye (Danai Gurira) are still kitted out with an impressive array of sleek metallic body armour. With their turquoise beads and headdresses, Namor and his minions reach back to Mayan influences, the only misstep – literally – being the silly, Tinkerbell-like wings around his ankles.

In other words, the production values that made Black Panther such a groundbreaking addition to an otherwise ho-hum canon of cape-centric escapism are still the best reason to reenter the world that Coogler and his cast built with such imagination and brio. But what Wakanda Forever underscores is just how dependent that world was on the actors at its centre.

It doesn’t take anything away from the talents of the mostly female cast that carries the new instalment – Bassett, Wright, Gurira, Lupita Nyong’o, Michaela Coel and newcomer Dominique Thorne – to note that even they can’t quite reproduce the ballast and chemistry of Boseman and co-star Michael B Jordan.

And it doesn’t do them any favours that the story keeps reminding us of that fact, continually burying its redoubtable cast under overlong fight sequences and passages weighed down by dialogue that’s either stiff and self-important or mawkish.

The problem with Wakanda Forever, ultimately, doesn’t lie in its principal players; had Coogler and his collaborators sent the script through one more pass, whittling it down to its most potent essence and balancing the elegiac self-consciousness with some cleansing humour, they could have sent the Black Panther down a new and invigorating path.

Instead, they leave viewers feeling as lost as the characters on-screen: What’s next for a character who assumed such immediate cultural significance, not just for the Marvel juggernaut but for world culture? Wakanda Forever doesn’t have the answer. Yet.