The Ministry of Transport and Infocommunications (MTIC) and the Ministry of Culture, Youth and Sports (MCYS) held tree planting campaigns at various locations across the nation in line with the Green Protocol Guidelines and in support of the Brunei Darussalam National Climate Change Policy (BDNCCP) on Saturday.

Over 600 saplings were planted at the Berakas Forest Reserve Biodiversity Park and within the MTIC’s surrounding premises.

The campaign was held by the MTIC with the support of the Forestry Department at the Ministry of Primary Resources and Tourism (MPRT). Minister of Transport and Infocommunications Dato Seri Setia Awang Abdul Mutalib bin Pehin Orang Kaya Seri Setia Dato Paduka Haji Mohd Yusof officiated.

The event began with the recitation of Surah Al-Fatihah and Doa by Brunei International Airport Surau Imam Haji Mohd Ashraf bin Haji Bujang, followed by a warm-up session and brisk walk in the park, and continued with the tree planting led by the minister. 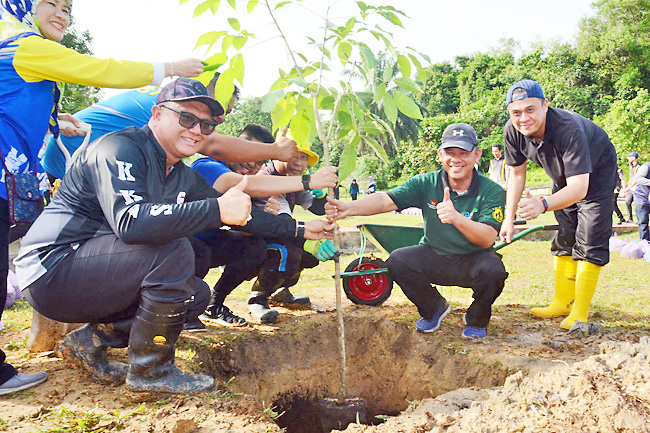 Meanwhile, 16 saplings of the tabebuia chrysantha species were planted at the surrounding of MCYS premises.

A similar campaign was also held at the Belait District Museum the same day, with Permanent Secretary Pengiran Haji Mohd Hasnan, the guest of honour, being welcomed to the museum by Museums Department Public Relations Officer Mariani binti Abu Bakar.

The event began with the recitation of Surah Al-Fatihah led by Mosque Affairs Officer at Muhammad Jamalul Alam Mosque Haji Alias bin Bakar, followed by the planting of saplings in the surrounding premises with the participation of guest of honour and volunteers from the museum.

It was held in support of the national cleaning campaign under the Steering Committee on Cleanliness Issues launched on June 5, in conjunction with World Environment Day carrying the theme ‘Ecosystem Restoration’.

The tree planting campaign, under the Green Protocol, is one of the initiatives towards reducing carbon footprint within government premises by adopting saving measures comprising seven elements – energy, water, paper and plastic consumptions as well as waste disposal management, official event management, and tree planting.

Each ministry was advised to participate in supporting the 26,000 Trees Campaign, which will be expanded and conducted in stages to achieve the goal.

The event also served to empower staff from the ministries and instil a sense of responsibility in preserving the environment and maintaining cleanliness in public places.