THE WASHINGTON POST – Last June, Amy Geren, bought a USD42,000 Airstream trailer, sight unseen, from a dealer in Vermont. The 16-foot, 2020 Bambi floor model was the last one on the lot.

“And I could sell mine tomorrow for more than I paid for it,” Geren, 49, said.

That may not be an exaggeration. Despite being forced to close for six weeks early in the pandemic, retail sales at Airstream dealerships jumped 22 per cent in 2020 and demand is still on the rise. “It’s beyond anything we anticipated,” said Airstream Chief Executive Bob Wheeler.

The growing popularity of Airstreams is part of a surge in sales of all recreational vehicles during the coronavirus pandemic. RV shipments set new records in November and December of last year, according to the RV Industry Association.

But Airstream, which will celebrate its 90th birthday this year, has found a new audience with its nostalgic cache. Its founder, Wally Byam, named his invention, with its rounded curves and polished aluminum body, an ‘Airstream’ because it moved down the road, he said, “like a stream of air”. Every trailer is still made by hand – each rivet requires the labour of two people. 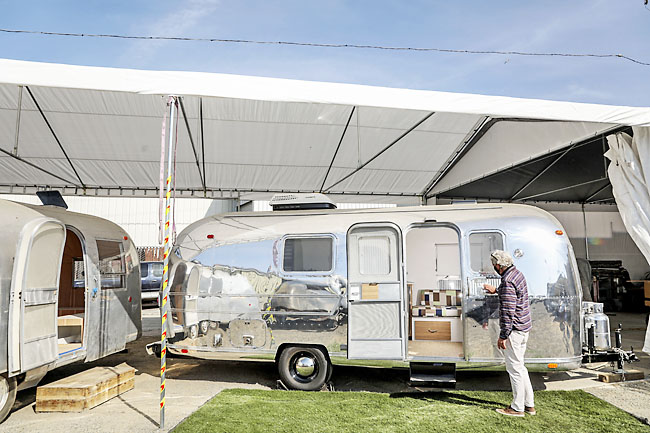 Perhaps because Byam grew up in a boomtown along the Oregon Trail, or because he started the company in California, Airstream has long been an iconic symbol of the West and The Great American Road-trip. It has been featured in movies, from What’s Eating Gilbert Grape to Legally Blonde, and counts Matthew McConaughey, Sean Penn and Sandra Bullock among its fans. President John F Kennedy once used an Airstream as a mobile office in New Mexico.

Now, in the midst of a pandemic, it is receiving another boost, as Americans weather profound shifts in how – and where – they work and learn. When her youngest child left for college, Amy Geren sold her house in suburban Portland, Maine and moved to a small condominium downtown, a few blocks from her job at a non-profit. But life in the city didn’t suit her, so Geren put the home up for sale in March 2020, just weeks before the state shut down because of COVID.

The uncertainty of the real estate market – and the world at large – pushed her to downsize again, this time keeping just what could fit into an Airstream, which she is now living, working and travelling for the foreseeable future.

“I love that it is so simple. Just a two-burner gas stove and mini fridge,” Geren said. “The only thing I would change on the layout is the ability to remove the dinette table so I could practice yoga inside on rainy days.”

Airstream dealerships closed their doors in March with full inventories – on average, about 40 vehicles. Now, many are down to just six or seven. It will take a year for the company to fulfill existing orders, said Wheeler.

“That kind of backlog is unprecedented,” he said. “It’s like nothing I’ve seen in my 19 years at this company.”

The pandemic has also ushered in a new Airstream customer base. Many of its new customers – 56 per cent during the past eight months – are new to RV life, said Wheeler. The vehicles have traditionally attracted couples and singles, but this year there were more families. In response to customer requests, Airstream is also building a variation of its Flying Cloud model with a new floor plan. This one, said Wheeler, has a separate, tech-enabled office, including being wifi-ready and with hook ups for a computer and mounted monitor. The new model goes for USD107,000.

Director of 3 Revolutions Future Mobility Programme at the University of California at Davis Giovanni Circella has been studying how the pandemic has affected mobility and said the widespread adoption of remote work has enabled greater flexibility to travel – but not for everyone.

“It’s true mostly for higher-income individuals and white-collar workers,” he said, noting that the option of remote work is far less prevalent among lower-income and minority employees, who are also more likely to be essential workers.

Airstream owners have an average income of at least about USD150,000, according to the company. New Airstreams cost between USD39,000 and USD177,000.

And owning an Airstream can be more expensive than it looks.

Kate Oliver, 35, founder of The Modern Caravan, an Airstream renovation business, and her wife, Ellen Prasse, 34, renovated and lived in a 1957 Airstream Overlander, as well as other Airstreams, from 2016 until June 2020, when the couple bought their first house. The cost of gas, propane for heating and cooking, insurance and camping ground fees, among other expenses, can add up, she said.

“You could really go bare bones and yes, some do, but I think a lot of the people that choose to live this way are privileged to be able to make that choice,” said Oliver.

These are the kind of customers that come to Denny Stone, 62, owner and Head of Design for So Cal Vintage Trailer in San Diego. The company offers high-end, bespoke renovations for Airstreams and similar vintage trailers.

A full renovation averages about USD125,000, said Stone, but can reach more than USD300,000 including disassembly of the trailer, structural repairs and the replacement of nearly all of its components – other than the aluminium exterior. More customers are now requesting new types of customisations, including fitting in an office or coffee station, he said.

Although business has been steadily increasing for years, when California implemented its stay-at-home orders, Stone was hit with a surge of calls and emails. “The increased demand was crazy,” he said.

Many of those calls were urgent, looking for finished, restored vintage trailers – something that could be bought off his lot, which Stone said he couldn’t provide. Those that ultimately became new customers – willing to wait three to six months to get their trailers into Stone’s shop – often had an interest in RVing and Airstreams, pre-pandemic. The coronavirus just pushed them to take the next step.

Finding an updated Airstream can be difficult. Founder of Airstream Hunter Ward Chandler said 2020 was his best year yet with transactions up about 250 per cent compared with the previous year.

“Demand far outstripped supply,” said Chandler. “And the thing people wanted more than ever before was an Airstream that was ready to use.”

Others are willing to wait. Emma Duerk, 27, and Mitch Budden, 28, were living in Ann Arbor, Michigan in 2019 when they decided to buy an RV and do some travelling, hoping to eventually transition to working remotely and living on the road full-time.