AFP – Twilight settles on Bamako, and traffic starts to clog the roads on the banks of the mighty Niger River.

But something else is stirring on the river’s brownish waters: ripples from a boat, moored to a bank, where 12 young dancers are pounding the boards to the sound of tomtoms.

To the bemusement of peanut hawkers watching nearby, the dance troupe members are in final rehearsals before they carry out a maiden performance aboard Mali’s first floating art venue.

“Every second counts. Everything has to be perfect tomorrow,” said dancer and choreographer Lassina Kone, 37, wearing short dreadlocks and vintage sunglasses.

Behind him, painters and welders are hard at work, putting the final touches to the rear of the boat. The vessel – the Pirogue of the Zeme (the Wise Man’s Canoe in the Bambara language) – is the brainchild of Kone, a restless artist, and Cheick Diallo, a well-known architect and designer. 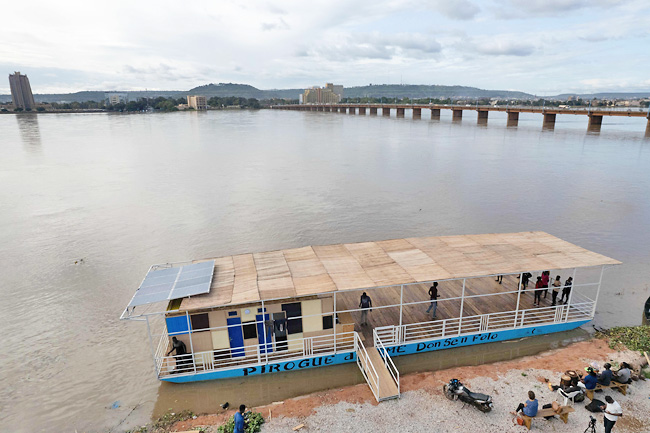 “It turned out that I had virtually the same dream,” he said. “So I teamed up with him.”

Their idea: to make art a moveable feast, no longer restricted to fixed venues in the cities and available to as many people as possible. “Floating artists” aboard a specially adapted vessel would move up and down the Niger, a river that nourishes West Africa from Guinea to Nigeria. They would bring dance, theatre, puppetry and exhibitions wherever they could find a place to tie up and people to entertain.

Both men had an established reputation. Lassina heads Don Sen Folo Lab, a creative nursery for artists in the village of Bancoumana, 45 kilometres from the Malian capital.

Diallo’s work has been widely exhibited internationally. He also oversees a photography exhibition held in Mali every two years which is one of the biggest cultural draws in Africa.

But their idea – in one of the poorest countries of the world, battered by a decade-old extremist insurgency – seemed outlandish at the time.

“We artists have the right to be crazy – it’s craziness that helps to break through the boundaries of everyday life,” said Diallo. “It was a meeting between two crazies.”

Four years after their talk, and with some financial help from the European Union (EU), the Pirogue of the Zeme was born. The overall project cost the equivalent of almost USD300,000, including the construction of the boat, salaries for the craftsman and funding for activities over four years.

The fruit of five months’ labour, the wood and steel vessel measures around 20 metres long by six metres wide. That provides room for a stage – covered by light matting to keep off sun and rain – for performances which are watched by an audience seated on the adjacent riverbank, and enough space for exhibitions.

But the boat’s relatively small size also means it is susceptible to the great river’s moods and movements.

Assetou Aida Doumbia, a 24-year-old dancer, admitted she had been taken aback by the idea of performing on water. “It’s really different, but we are 100 per cent ready,” she said.

Yacouba Coulibably, 28, added, “There’s a particular challenge to working as a dancer in this environment. This is the first time that I’ve been on a boat.”

The EU’s envoy to Mali, Bart Ouvry, had no problems defending Europe’s decision to back the unusual venture. “This is a way of getting to know a different Mali,” he said.

Culture “helps to prevent young people from falling into something else”, he said.