PROVIDENCE, RHODE ISLAND (AP) – A Rhode Island police officer accused of punching a woman at a protest while he was off-duty has now been charged in connection with last Friday’s demonstration at the State House.

Chair of the progressive Rhode Island Political Cooperative Jennifer Rourke said she had been punched in the face at least twice by Lugo.

Providence police said Lugo had been suspended from his job with pay pending an investigation.

The protest outside the Rhode Island State House in Providence was in response to the decision released the same day by the United States (US) Supreme Court overturning Roe v Wade.

A video of the event posted online shows a physical altercation at the protest right before a woman appearing to be Rourke is seen being hit. The video does not show what happened between Lugo and Rourke beforehand. 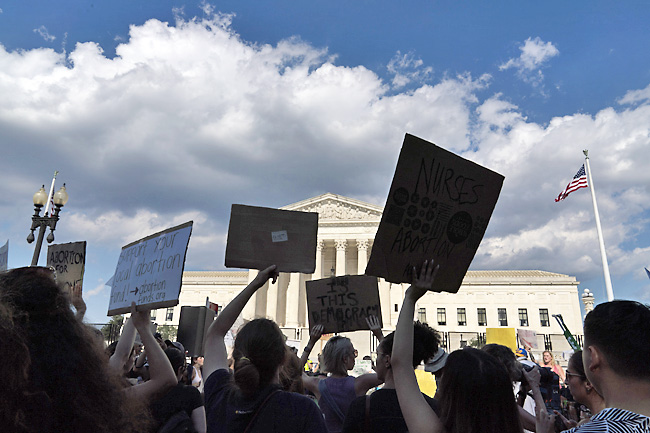 In a call with the Associated Press, Rourke said as she was attempting to escort a counterprotester who agreed to leave off the premises, another physical altercation broke out during which she was punched in the face multiple times. She confirmed she pressed charges against Lugo.

State police said Lugo turned himself, was arraigned before a justice of the peace and then released. He’s due in court again on July 8. Lugo didn’t respond to requests for comment, but told the Boston Globe before charges were announced he “stepped in to protect someone that a group of agitators was attacking”.

Lugo also told the Providence Journal he was “not going to deny” the punching allegation, but added that “everything happened very fast”.