BUDAPEST (AFP) – Lewis Hamilton missed the chance to chalk up his 100th victory but did take over the lead in the world championship as France’s Esteban Ocon steered his way through a chaotic Hungarian Grand Prix on Sunday to collect his first ever win.

After a tactical error dropped pole-sitter Hamilton to last place, the Briton picked his way through the field, finally clawing his way past Ocon’s Alpine teammate Fernando Alonso, to finish third behind the Frenchman and Sebastian Vettel in the Aston Martin.

However, Vettel was later disqualified when it was deemed his car had breached fuel regulations.

Hamilton was promoted to second place with Ferrari’s Carlos Sainz filling out the podium.

For 24-year-old Ocon, who controlled the race from the front, it marked a maiden win in his 78th Grand Prix and a first victory for the new-look Alpine set-up. 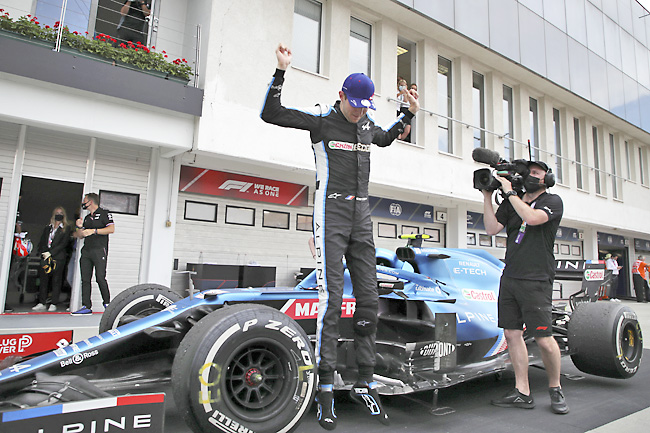 “It’s fantastic, what can I say? Congrats to Alonso as well, I think the win is also thanks to him with the fight that he did. It’s teamwork, it’s been a fantastic day!”

Max Verstappen’s Red Bull was damaged in a first lap crash, which took out five cars, and he eventually finished 10th.

The Dutchman was then promoted to ninth after Vettel’s expulsion leaving Hamilton to take an eight-point lead in the championship.

“Congratulations to the Alpine team and to Esteban for his first win – he’s been a shining star for a long time,” said Hamilton who was booed again during his post-race interview by a section of the packed crowd who blame him for the crash at the British GP two weeks ago which took out Verstappen.

“Today was definitely tough, we always make it difficult for ourselves.

“Crazy to think we were the only ones on the grid at the start, but these things happen and we learn from them. I gave it everything and I have nothing left in the end.”

Mercedes also took over the constructors championship lead. Going into the summer break they are now 12 points ahead of Red Bull.

Two weeks after the controversial collision between Hamilton and Verstappen on the opening lap at Silverstone, there was early trouble again at the Hungaroring, this time prompted by Mercedes’ Valtteri Bottas.