The 22-year-old prodigy outduelled American Josh Teater down the back nine to capture the trophy in only his 17th tour start, firing a final-round two-under par 70 to finish on 20-under 268 for a one-stroke triumph at Coco Beach.

Hovland, ranked 102nd, rallied from a triple-bogey disaster at the par-three 11th thanks to an eagle at the par-five 15th and his closing birdie at the rain-drenched 18th hole.

“The triple bogey on 11 really hurt,” Hovland said. “The crazy chip-in on 15 put me ahead and the putt on the last was just a bonus.”

Teater, who kept the pressure on Hovland with birdies at 15 and 17, settled for matching his best US PGA result, a 2013 runner-up effort at Torrey Pines.

“There’s nothing but good here. It was a great week,” 351st-ranked Teater said. “Hats off to Viktor. That was a great putt.”

Hovland, the low amateur at last year’s Masters and US Open, had a top prior finish of fourth last year at Greensboro.

Hovland birdied the par-five fifth and opened the back nine with a chip-in birdie to seize a three-stroke lead at 20-under before disaster struck at 11, a hole he birdied in each of the first three rounds.

Hovland missed the green off the tee, needed two more shots just to reach the fringe and three-putted to fall back into a share of the lead with Teater and Stanley.

“I just suck at chipping,” Hovland said. “I definitely need to work on my short game and was definitely exposed there.”

Stanley took bogeys at the par-three 16th and 18 to fall back but Teater birdied 15 to seize the lead at 18-under.

Hovland responded by chipping in from greenside rough for eagle at the 15th to reclaim the lead at 19-under, dropping the ball onto the fringe and watching it roll into the cup. A hard rain began with Teater approaching the 17th green, but the 40-year-old holed a tricky birdie putt on the wet putting surface to match Hovland atop the leaderboard.

Showers relented and the final two greens were cleared of puddled water for the decisive last groups, setting the stage for Hovland’s winning putt. 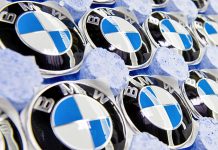 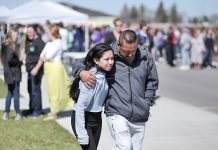 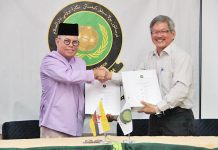