AP – Following an outcry over the lack of diversity in last year’s nominees and an overhaul of its rules and regulations, the EE British Film Academy Awards on Tuesday unveiled a far more inclusive field of nominees, including record nods for female directors and a leading seven nominations for Chloe Zhao’s Nomadland and Sarah Gavron’s Rocks.

Much like previous Academy Awards controversies, last year’s nominations by the British Academy of Film and Television Arts (BAFTA) were denounced for their all-male directing nominees and all-white acting nominees, a backlash that spawned a #BaftasSoWhite hashtag.

Director Steve McQueen said the BAFTAs — Britain’s equivalent of the Oscars — risked irrelevancy. After winning for his performance in Joker, Joaquin Phoenix said he felt “conflicted” even accepting the award.

The British academy responded with a seven-month review. It expanded membership, mandated unconscious bias training for its 7,000 voting members, grew the number of nominees in numerous categories and changed the nomination process to include a long-list phase.

Acting categories were selected in part through juries. Watching all longlisted films was made compulsory viewing. And the longlisted directing field was divided equally between women and men. 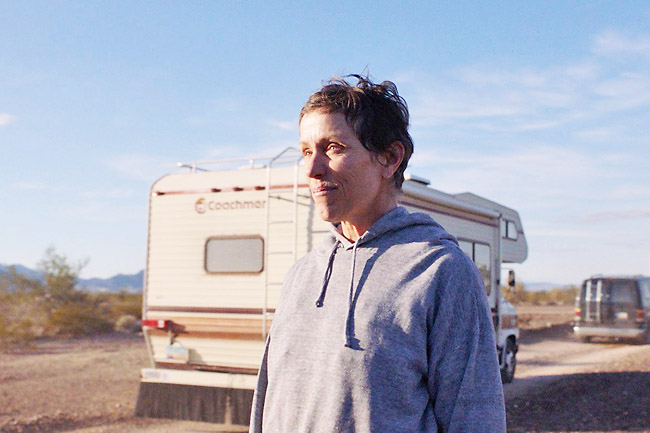 The results on Tuesday made for a radically different BAFTAs. The leading vote-getters were Zhao’s drama about a middle-aged woman (Frances McDormand) who travels the American West while living out of her van, and Gavron’s coming-of-age tale about a Black British teenage girl (Bukky Bakray) in London.

“Seeing how people are just so like in love with Rocks, it kind of makes you feel indispensable in the world, and makes you feel less marginal to the broader picture,” Bakray, who was nominated for best lead actress, said by video interview.

“And it just makes you feel like the main character in your own story.”

Four of the six directing nominees are women, including Zhao, Gavron, Shannon Murphy (Babyteeth) and Jasmila Zbanic (Quo Vadis, Aida?). Also nominated are Lee Isaac Chung for the family drama Minari and Thomas Vinterberg for the Danish dark comedy Another Round.

Despite the pandemic, a total of 258 films were entered into this year’s BAFTAs, which the academy said were watched more than 150,000 times through its online platform.

“Hundreds of people were involved in that review. Out of it came a 120 changes that we’ve made across the organisation,” said Berry. “But one of the biggest pieces of feedback was that the feeling was that not enough people were watching enough films.”

Up for lead actress are: Bakray, McDormand, Radha Blank (The Forty-Year-Old Version), Vanessa Kirby (Pieces of a Woman), Wunmi Mosaku (His House) and Alfre Woodard (Clemency). Up for lead actor are Riz Ahmed (Sound of Metal), Chadwick Boseman (Ma Rainey’s Black Bottom), Adarsh Gourav (The White Tiger), Anthony Hopkins (The Father), Mads Mikkelsen (Another Round) and Tahar Rahim (The Mauritanian).

The nominations left out some notable performances that have been nominated elsewhere, including Carey Mulligan (Promising Young Woman), Viola Davis (Ma Rainey), Sacha Baron Cohen (snubbed for both Borat Subsequent Moviefilm and The Trial of the Chicago 7), Andra Day (The United States vs Billie Holliday) and both Gary Oldman and Amanda Seyfried from Mank.

The nominees for most outstanding British film — a category expanded to 10 — are: The Dig, The Father, Calm With Horses, His House, Limbo, The Mauritanian, Mogul Mowgli, Promising Young Woman, Rocks and Saint Maud.

The BAFTAs will be held virtually this year from London’s Royal Albert Hall.