No sweat as Kyrgios sees off Tsitsipas

HALLE WESTFALEN, GERMANY (AFP) – Nick Kyrgios (AP pic below) impressively rallied past Stefanos Tsitsipas at the Halle grass court tournament on Wednesday to hammer home his status as a Wimbledon threat but only after a spat with the chair umpire over sweating.

The 27-year-old smashed his racquet after losing the opener after saving three set points.

He then got into a minor spat with the chair umpire in the third game of the second set, landing himself with a warning for time-wasting.

“He said I was playing too slow – statistically I’m one of the fastest,” Kyrgios said.

“I had to walk to the sidelines to get my towel, there is this thing called sweat in 30 Celsius heat that runs down onto your hands.

“I needed to wipe my hands and he gave me a warning.” 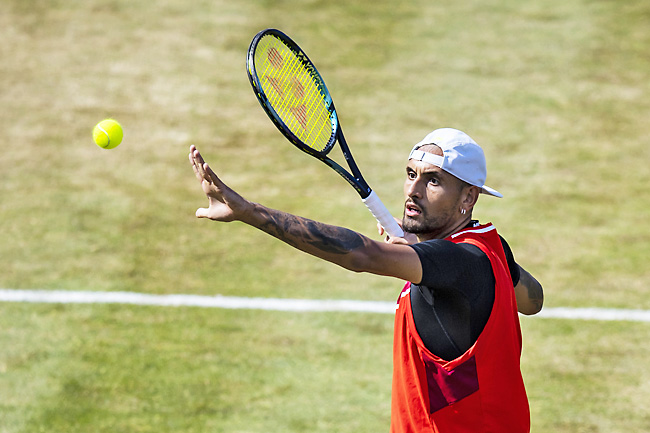 Kyrgios immediately sat down mid-game on his bench and thrashed the point out with the chair before returning to the court amid cheers.

“The support I get from crowds around the world is amazing. They want me to go out and put on a show,” he said.

Kyrgios called what he judged a frivolous warning “an unnecessary part of the game. It’s not needed in a stadium full of people”.

“I later hit two aces just to prove my point.”

Kyrgios, who has played only five events this season outside of Australia, said he is proud of winning on his own terms – without a coach and playing only when it suits him – while still keeping his ranking at its current 65th.

“There needs to be more grass events for sure, I’ve been talking about it for ages,” he said after defeating the second seeded Greek while saving seven of eight break points in just over two hours.

“If we had six grass court tournaments in Australia, I’d never leave the country.”