QUITO (AFP) – In a hall in the Ecuadoran capital, a group of men raise their arms up high, draw a deep breath, and release it in tandem with a resounding “aaah!”

This is no ordinary relaxation class: most in the room are convicted domestic abusers attending court-ordered therapy, others are here voluntarily.

In a country where 65 per cent of girls and women aged 15 to 49 experience violence, according to official data, the ‘Men’s Club for Good Treatment’ seeks to give men tools, other than aggression, to deal with conflict.

The 20-day course – one session a week – focusses on changes in behaviour and attitude to improve the men’s self esteem and relationships.

Among them is Jorge Sanchez, a 34-year-old food deliveryman sentenced to therapy and 60 hours of community service for having violently shoved his ex-girlfriend.

It was either that or jail.

Sanchez attacked his ex after he saw her out with another man. 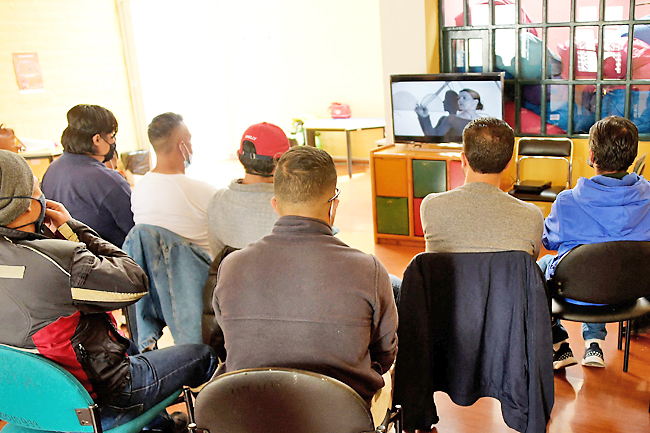 “I got very angry and that was when I exploded, I exploded with jealousy,” he told AFP.

“I used to give in to my anger, but I have overcome that” thanks to the sessions, he said, adding he was “ashamed” of how he behaved at the time.

After a series of breathing and stretching exercises, Sanchez and the others settle down for the rest of the day’s three-hour programme, which includes an exchange on personal shortcomings, virtues, and fears.

Together, they draw up a list for discussion; with impatience, laziness and irritability under the first heading, respectfulness, honesty, patience and loyalty under the second, and discrimination, loneliness and loss of one’s children under the third.

The men are aged 30 to 60, with their jobs ranging from office clerks to factory workers.

Violence against women is rampant in Latin America and the Caribbean, with some 27 per cent suffering at the hands of a romantic partner at least once in their lifetime, according to the Organisation for Economic Co-operation and Development (OECD).

In Ecuador, the prosecutor’s office said 551 “femicides” were committed in the country from 2014 to May 2022 this year – with a third committed by intimate partners.

According to the United Nations (UN), femicide is generally understood as the intentional murder of women because they are women.

When all recorded killings of women in Ecuador are listed, the figure rises to 1,432 for the same period, according to the prosecutor’s office.

According to the UN, reducing violence against women – a phenomenon that increased in many countries during coronavirus lockdown – is a key step towards reducing femicides.

Coordinator Roberto Moncayo said the club has helped 545 men since it was established in 2010.

To date, there have been no repeat offenders.

“The methodology with which we work is to think, to feel, to act,” Moncayo explained.

“So we force ourselves to think about how we are playing our roles as men in the family environment, in the workplace, in the social sphere, but above all, becoming aware of how violence, aggression, forms part of our relationships.”

Mechanic Jose Padilla, 39, joined the club after his former partner accused him of harassment, a charge he denies.

“At first, I was frustrated, I was even embarrassed,” and attended the sessions unwillingly, he told AFP. Since then, he said he had learnt valuable lessons in “patience” and “control of emotions”.