No injuries in fire at Illinois chemical plant : Officials

LA SALLE, IllINOIS (AP) – Officials said a large fire that sent smoke plumes towering over a northern Illinois chemical plant has been contained and no injuries have been reported.

After the fire began on Wednesday morning at Carus Chemical in La Salle, local officials sent an emergency alert advising people who live in the city’s third and fourth wards to shelter in place. That order was lifted at 5pm.

Carus Chemical workers were evacuated from the plant and all them have been accounted for, said La Salle Police Chief Mike Smudzinski.

There were reports of explosions being heard at about 9am followed by smoke that was visible from the plant, the News-Tribune reported.

La Salle Fire Chief Jerry Janick said he couldn’t confirm any explosions. He said it’s not known yet what caused the blaze. 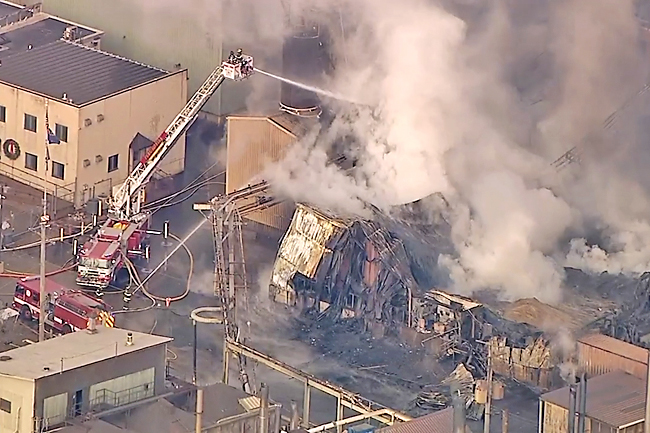 In a statement, a Carus official said the fire began in the plant’s shipping area.

“We are thankful everyone is safe, and we are also grateful to the La Salle Fire Department and crews from the surrounding area who responded to address this situation to keep the area safe,” said, the company’s Vice President of Operations Allen Gibbs. “Carus’ priority is to protect the health and safety of the employees, emergency personnel who are responding to this fire and the nearby community.”

Carus Chemical produces potassium permanganate, an oxidant used to treat drinking water, wastewater, industrial process chemicals and for numerous other applications, according to the company’s website.

At a press conference on Wednesday afternoon, Gibbs said the oxidant released during the blaze can cause staining but it can be cleaned with household vinegar and hydrogen peroxide. The company set up a hotline to address residents’ questions, he said.

“It’s a good chemical that cleans up the drinking water,” Gibbs said. “When it’s in the form it’s in, it can create a problem. It oxidises and it turns into a dust.”

As firefighters responded on Wednesday morning, the blaze sent dramatic columns of smoke into the sky. Aerial photos of the site showed a collapsed structure, burnt columns, trucks and other rubble.