‘No divine medicine for crisis in Myanmar’, says ASEAN envoy

ANN/PHNOM PENH POST – Minister of Foreign Affairs and International Cooperation Prak Sokhonn (pic right), in his capacity as the ASEAN special envoy on Myanmar, said his second trip was “somewhat fruitful”, while cautioning that he has no “divine medicine” for Myanmar’s crisis.

Sokhonn made the remarks following his visit, which was capped off by the separate Mekong-Lancang Cooperation (MLC) Foreign Ministers’ Meeting.

Sokhonn briefed an audience of journalists and foreign diplomats upon his return to Phnom Penh on July 6 regarding the results of his second trip, which he said had been “somewhat fruitful”.

Sokhonn said leaders of Myanmar’s ruling State Administration Council (SAC) had hinted that they may be willing to accept some opposition members if they were to cease fighting, but only under certain conditions.

“First, they can’t continue to attempt to destroy the government if they are going to join it.

“Second, they aren’t going to be replacing the government. And third is that the 2008 constitution must be the basis for peace talks,” Sokhonn said, adding that these conditions were set by SAC chairman Senior General Min Aung Hlaing, whom he met for over two hours on this trip. 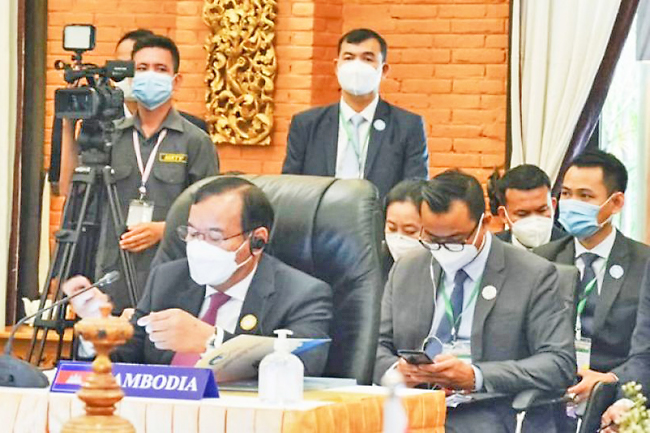 “Although there are conditions attached, I think that at least we have paved the way for the start of negotiations. The wheels are back on for peace talks so now they can roll forward.

But whatever is possible will depend on all of the sides in the conflict in Myanmar,” he said.

Sokhonnn said he was told that his latest request to meet with former civilian leader Aung San Suu Kyi was denied by the SAC, who cited “judicial procedures” as their reason.

Sokhonn also mentioned that his request to meet with another opposition figure – Su Su Lwin, former Myanmar First Lady and founding member of the now-dissolved National League for Democracy (NLD) previously led by Suu Kyi – was also denied, with the SAC in this case saying it was due to her poor health.

He said that following his meetings with opposition leaders and foreign diplomats stationed there, he concluded that the rival groups – especially the armed civilian insurgents – are at least partly responsible for the ongoing violence, including destruction of public property and the killings of civil servants such as teachers and health officials.

He said that the cessation of violence can only be achieved through the participation of all stakeholders in the conflict.

All the groups he met had said they were concerned about the violence, threats and fear which is haunting all of the non-combatants in the regions they control.

“I have fewer than six months left in my mandate and I should say that I don’t have a divine medicine to resolve the Myanmar crisis. I am not a magician. To be honest, what ASEAN and myself can accomplish is to facilitate the peace process by promoting inclusive dialogue acceptable by all sides.

“What we can do is to help stop the violence and remind all sides not to push their country further to the brink by fanning the flames of civil war, which could trigger regional security and stability crises, but would especially be a tragedy for Myanmar’s people,” he said.