No choice but to leave

BHOLA, BANGLADESH (AP) – When the Mehgna River swallowed Mohammad Jewel and Arzu Begum’s tin-roofed family home overnight in southern Bangladesh just over a year ago they had no choice but to leave their ancestral village.

The couple fled the next morning with their four young boys to the capital, Dhaka, over a hundred kilometres away from their home in Ramdaspur village in the Bhola district, one of the hardest-hit coastal areas where many villagers regularly lose their houses and land to rivers flowing into the Bay of Bengal.

“We have grown up seeing the river, we live on the river by catching fish. But now it has taken everything from us,” Jewel said.

“My heart aches when I think of my village, my ancestors, my old days. I had no choice but to leave my birthplace.”

The mighty rivers that run through Bangladesh, such as the Mehgna, originate in the Himalayas or in Tibet, and run through northern and northeastern regions of the country before flowing down to the sea in the south.

More than 130 rivers criss-cross through the low-lying nation, some of them prone to severe flooding. 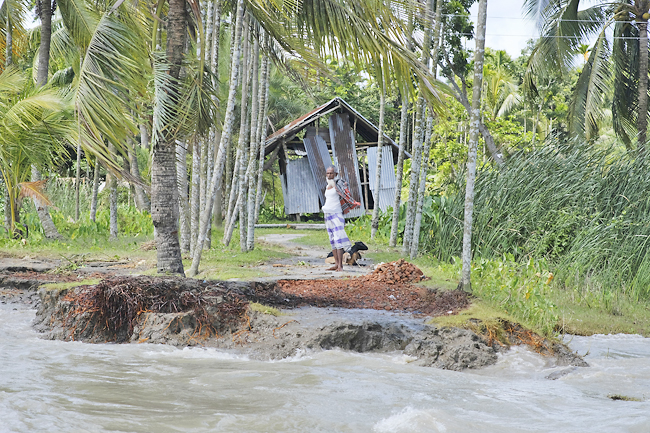 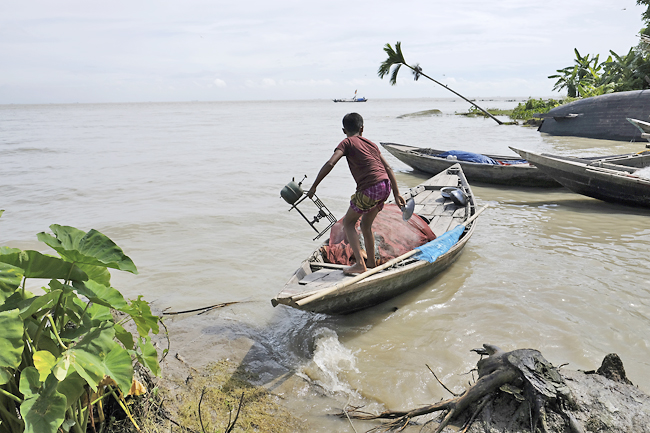 Experts said climate change is causing erratic weather conditions in the country, resulting in a rapid collapse of riverbanks and the destruction of village after village.

During the monsoon season, which runs from June to October, many rivers change course, devouring markets, schools, mosques and homes near their banks.

Bangladesh is expected to have about a third of South Asia’s internal climate refugees by 2050, according to a World Bank report published last year.

When Jewel and Begum visited their family’s old home in Ramdaspur a year later, even more homes were washed away, the river surging through new lands. Jewel said the river never felt that close by as a child, but it inched nearer every year.

“By the time we grew up, all the land and houses were destroyed by the river. The place we are standing now will also be eroded in the river in a few days,” he added, just feet away from their old family home.

He said the village was once brimming with small shops and tea stalls, markets and green spaces. The land was fertile. But over the years, people were forced to abandon their homes. He estimates that no more than 500 people now live in the once 2,000-strong village.

Walking through the remnants of their former community, his wife Arzu Begum also feels pain, even though the abundant water in recent years made life difficult for the family.

“I raised my youngest child by tying his legs with a rope attached to the door of my house because of the fear of drowning. During the tide the house got filled with water and my youngest child always moved toward water,” remembered Begum.

“All these got destroyed in the river erosion and people got scattered,” she said, pointing to the homes of friends and neighbours.

“Some are living on raised platforms, some in rented homes, some in makeshift shelters at the side of dams and so on. I moved to Dhaka. We lived in a large community. Now all you can see is the river and nobody living there.

“We have become homeless,” she said.

It’s estimated that more than 2,000 migrants arrive in the capital Dhaka every day, with many fleeing coastal towns.

In the northern part of Bangladesh’s capital, officials are building shelters for climate migrants and improving the water supply, but Jewel and Begum’s family are one of many unable to benefit from these projects.

Officials also are working with smaller cities to be designated “climate havens” that welcome migrants.

Experts said that limiting planet-warming greenhouse gas emissions, especially in the high-emitting nations like the United States (US), China and India, will help limit more drastic weather events around the world.

Now in Dhaka’s poor Mirpur area, living in a one-room hut raised over a swamp, Begum and Jewel may be away from the swelling Mehgna, but say they can’t adjust to the difficult city life.

“We had a place of our own and didn’t have to pay any rent. Our monthly income was sufficient to run our family,” recalled Begum, referring to their life back in Ramdaspur.

“Now we are forced to pay home rent and spend such an amount of money for food that what we earn isn’t enough for the family,” she said.

Her husband earns BDT12,000 (USD136) a month by doing a “dirty job” going door-to-door and sorting household waste while Begum earns another BDT4,000 (USD45) as a cleaner for two different houses.

Jewel, who used to catch fish in his village, said they lived there joyfully and thought of giving a better life to their children.

“I had a plan to raise my children properly, to send them to school. But now, everything is so uncertain that I don’t know how we would survive. My children are growing up but I cannot take care of them,” he said.