TURLOCK, UNITED STATES (AFP) – Just like any other Portuguese bullfight, the elegant rider deftly guides his horse around the charging bull’s horns, before bending down to plant a bandarilha in its spine.

Except that no blood is spilled – the small spear is velcro-padded, and sticks to a cushion attached to the bull’s back – and most of the spectators’ cheers are in English.

The scene takes place in Turlock, a small town in the heart of rural California, where tens of thousands of Portuguese-Americans have lived for decades, keeping the traditions of their ancestral homeland alive, not least bullfighting.

But due to Californian law, there can be no bloodshed.

“The first time I came here in California, 15 years ago, it was like ‘woah, amazing’ because they have everything like Portugal,” said Joao Soller Garcia, a ‘cavaleiro’ or horse rider, who travelled from Lisbon to take part in the bullfight.

“Go to a bullfight in Portugal and it’s the same thing,” he said shortly before entering the arena to be applauded by some 4,000 spectators.

The majority of the crowd are of Portuguese descent – mainly immigrants from the Azores islands, who began to settle this agricultural area in the early 20th Century.

The community has been growing ever since, with its own newspapers, radio stations and associations. 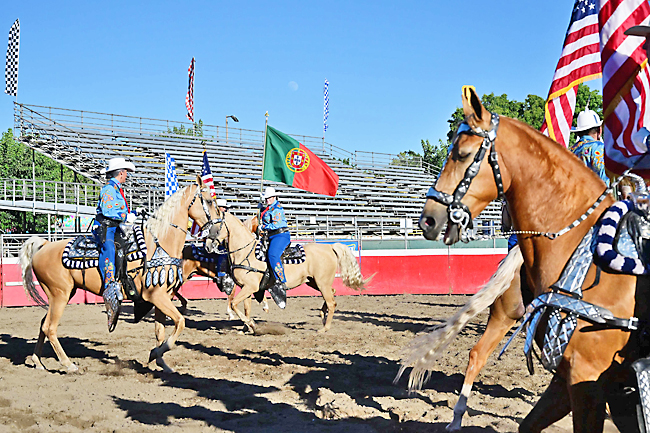 Some 350,000 Californians proudly claim Portuguese heritage, and often remain fiercely attached to their culture and language.

This is the case for Jose, 30, who came to watch the bullfight with friends.

Born in California, he switches from English to Portuguese seemingly without noticing.

“It comes naturally to me. A lot of people here speak Portuguese in their daily life, even the younger ones, “ he said.

“Sometimes it is easier for me to express my feelings or to joke in Portuguese. Portuguese is a very emotional language,” he added.

Above the arena, the Portuguese flag flies alongside the American flag, and the Portuguese national anthem strikes up before its United States (US) counterpart.

The bullfight itself is organised by a religious group, led by Antonio Mendes, a cattle breeder in his 70s who revived the tradition in 1993.

“We’re Portuguese and that’s part of our lifestyle, especially the island that I’m from – it’s just rooted,” he said.

Portuguese bullfights differ from the Spanish style, in that the animal is never killed in the arena.

But in traditional Portuguese events, the bull has been weakened by several bandarilha strikes by the time the forcados – eight men with no horses or protection – enter the arena to tackle the animal with their bare hands.

Because the bulls in Turlock are not hurt, breeders like Mendes have created a bloodline which is just as combative, but less heavy.

Teams like Martins’ are often dubbed “suicide squads” for a reason – one of them literally has the task of grabbing the bull by the horns, suffering powerful headbutts to the stomach as his companions wrestle with the animal.

“It’s not just brute strength… it takes a lot of technique,” he said.

Joao Soller Garcia, the cavaleiro, enjoys both the classic Portuguese style and its Californian adaptation.

“Compared to Portugal, it is a little bit more dangerous because the bull is not hurt,” he said.

“It’s completely bloodless and we have to be more careful… the bull is at full strength.”

But for Maxine Sousa-Correia, from a family of cattle breeders who have produced bulls for Californian fights since the 1970s, the use of velcro bandarilhas diminishes the spectacle.

“Unfortunately, this is a mere imitation… We invented the velcro pad and the velcro on the end of the stick just so that it would at least add some colour and some pageantry,” she said.

“But at the same time, we’re not doing justice to this animal, because this is what this breed is all is for.

Her husband Frank Correia added, “I think it sucks! It should be done the way it is in Portugal. But we can’t because we’re in the US and, you know, they don’t appreciate the art.”