THE WASHINGTON POST – After almost four years, I finally had the chance to tell enigmatic and eccentric video game creator Yoko Taro (pic right) about the therapy sessions he induced.

You see, in 2017 I was 36-years-old and returning to therapy. At the same time, I was playing Taro’s latest game, Nier Automata. By the time I received its final ending, I returned to my therapist and proceeded to explain the game to her. We spent three weeks talking about the game, and how I felt about it.

So finally, I jokingly asked Taro, who can I send the invoices to for those three therapy sessions?

Helpful, since I may have to do this again while trying to finish Nier Replicant.

Nier Replicant is a new version of the underrated, critically bashed 2010 prequel Nier, and much of the game’s level design, story and situations are the same. But there’s an all new ‘Ending E’, waiting for the patient and loyal. I was able to “beat” the game twice – but I wasn’t able to get to that new ending by the review deadline. 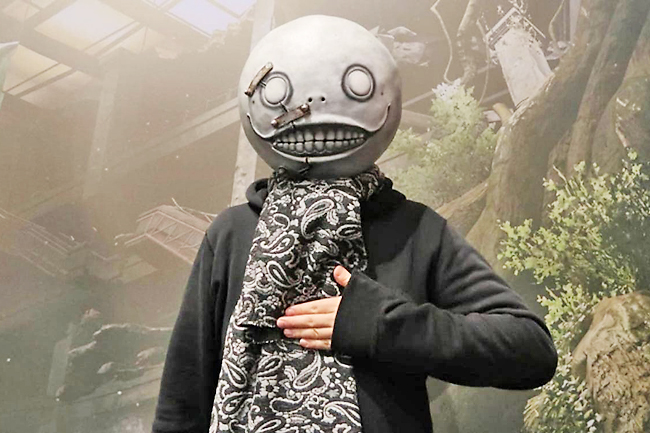 Like Automata, the older game also required three to four playthroughs to get the whole story and understand all the perspectives. And you need to understand them, because the game is constantly calling into question the merits of heroics and personal sacrifice. This new upgrade, releasing on PlayStation 4, Xbox One and PC on Friday, is no different.

But even without knowledge of the new content, Nier Replicant is a must-play for anyone who loved Automata, a game some praise as one of the finest ever created. As I’ve written, this updated version is perfect for anyone who wishes to understand Automata in greater depth.

Nier was not well received critically and commercially in 2010. The reviews from journalists in the United States (US) were not kind, calling it ugly, unoriginal and repetitive. Some of these criticisms were well founded, especially when it came to repetitive gameplay. That repetition persists in this newer version, and is actually one of the reasons I couldn’t quickly access the final ending. The game requires multiple playthroughs, and still retains an unfortunate, arbitrary inventory requirement to see its original story to its true ending.

While there are some rewarding side quests that may speed along this process, needing to buy each one of the dozens of weapons in the game doesn’t seem to serve any narrative or thematic purpose besides prolonging the play time. The 2010 reviews were harsh on these side quests, which on the surface appear to be mundane fetch quests. But the game’s themes of yearning for identity and self determination are baked into these supposedly dull fetch quests.

Fortunately Replicant comes with a very customisable “assist” mode, which will autoplay certain functions for the player. A player can make Nier automatically evade and attack everything, while you spin the camera around like an amateur anime director. If you want to stay more engaged, you can have Nier automatically evade, while you still attack. Or you can just focus on dodging and let everything else play for you. It makes subsequent playthroughs and the repetitive grind easier, and the assist mode will go down easier in an age where “watching a video game get played” has been accepted as mainstream entertainment.

The first Nier game appears to be a deconstruction of The Legend of Zelda and video game formula. This doesn’t absolve the game for being tedious, but it also appears to be a deliberate artistic choice – and one that is always going to frustrate certain audiences.

But Nier Replicant is a game that will demand your attention. If you want a more frivolous game to hurry through and not read paragraphs of actual text to proceed, play another game, because this game will literally stop you unless you do so. This game asks that you understand its characters, playing directly on your emotions.

Like an ambitious pop album, Nier Replicant dabbles in several genres, whether it’s an isometric Diablo dungeon crawler or a text adventure that takes up to an hour to finish reading. It isn’t always coherent, but it’s still the same artist, the same tools and within the same work of art. It will shift tones, sometimes satirising video game tropes, and sometimes drawing on them for inspiration.

The game’s full name is Nier Replicant ver.1.22474487139… because Taro felt like calling it a remaster or remake would be a bit extravagant. In his message to games journalists, he said he worried about the game being compared to another under publisher Square Enix’s umbrella, Final Fantasy VII Remake.

“I saw that and I thought it would be terribly inconvenient to be compared to such a massive blockbuster,” Taro said.

I asked Taro and the man I’m supposed to send my therapy bills to, producer Yosuke Saito, if they’re paying attention to any interesting trends in the industry. Sato said he’s delighted to see games from independent studios see global success, and that attention is slowly moving away from big-budget, AAA titles.

As for Taro, “Yes. I pay attention. Lots of young people and business persons gather in places that are trending like that, so I know to avoid it.”

I also tried to take a measure of what kind of media consumer Taro is, and what might inspire him. He is famously influenced by the classic anime Neon Genesis Evangelion, and I told him many players look to his work with similar reverence.

“I feel that… that watching Evangelion would be 100 times better for creative reference,” Taro said.

But he raised an interesting example that draws many parallels to his own career path, as well as the story of the Nier series.

“I don’t watch very many movies or drama, nor do I read very many books,” Taro said. “But I did watch The Greatest Showman and cried. It’s a simple story of a flawed man who gains success by hitting up the right people. And despite that, he was able to create a truly wonderful ‘show.’ That juxtaposition made me think, ‘What makes an entertainer?’”

With Automata, Taro finally had the team in place to construct a snappy, action-heavy video game that feels as fun to play as it is depressing to read and experience. Nier Replicant replicates this, all while retaining Taro’s uncompromising, unsparing original vision. If Taro was ever discouraged by the critical response to Nier, it doesn’t show. Instead, he took what was frustrating about the game and barrelled through to make it work.

And it works in Replicant. The game’s pacing may not be as refined as Automata, but that won’t matter. For myself, Taro’s ability to write empathetic, passionate characters is enough. Any reason to spend more time with them is welcome. The brother-sister dynamic of the protagonist isn’t even the central emotional relationship in the game. Rather, it’s between the characters and the player. How far are you willing to go as a player to save a character you’ve grown to know and love?