Neymar trial opens in Barcelona ahead of World Cup

BARCELONA (AFP) – With the World Cup barely a month away, Brazilian superstar Neymar went on trial in Spain yesterday over alleged irregularities in his transfer to Barcelona nearly a decade ago.

Wearing sunglasses and a dark suit, the 30-year-old waved to the press as he arrived at the Provincial Court of Barcelona with his parents who are also in the dock.

Spanish prosecutors are seeking a two-year prison term for Neymar and the payment of a EUR10-million-fine.

The high-profile trial is the culmination of a years-long legal saga over his 2013 transfer from the Brazilian club Santos to Barcelona.

He then joined Paris Saint-Germain in a world record EUR222 million transfer in 2017. 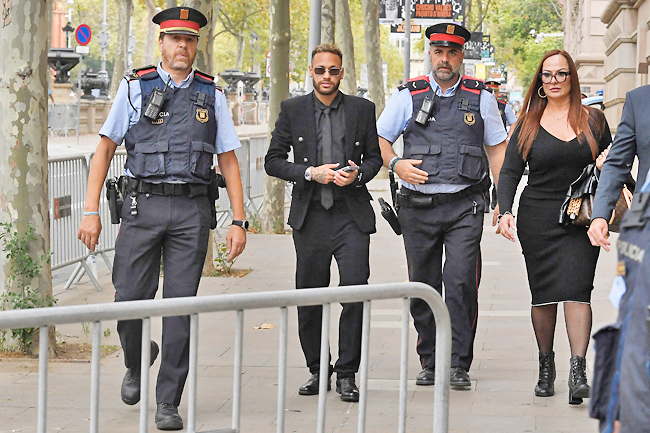 Neymar, who came to Barcelona just hours after scoring the winning goal against Marseille in a Ligue 1 match on Sunday night, is one of nine defendants on trial on corruption-related charges, among them his parents and their N&N company, which manages his affairs.

Investigators began probing the transfer after a 2015 complaint filed by DIS, a Brazilian company that owned 40 per cent of the player’s sporting rights when he was at Santos.

Barcelona said the transfer cost EUR57.1 million, but prosecutors believe it was at least EUR83 million.

The club said it paid EUR40 million to N&N and EUR17.1 million to Santos, of which EUR6.8 million was given to DIS.

But DIS alleges that Neymar, Barcelona and the Brazilian club colluded to mask the true cost of the deal.