THE WASHINGTON POST – All through his research for his new book about Our Town – the seminal, deceptively placid play about ordinary life in a New Hampshire town – Howard Sherman kept coming back to a single paragraph of dialogue. Sixty-one words in Act 3, spoken by the play’s narrator, the Stage Manager, as he gives the audience a tour of the town cemetery, pointing out meaningful landmarks.

Sherman, a freelance writer who once ran the American Theatre Wing – co-producers of the Tony Awards – read the passage again after the January 6 desecration of the US Capitol by a violent mob. He was struck anew by the potency of the spartan language in Thornton Wilder’s 1938 work, and how eternally pertinent the images. Here in one brief vignette about “boys” who fought for a nation they barely got to experience was an explication of why the Capitol riot was such a violation of their sacrifice.

“It’s really something, the way this play can work on you,” Sherman said in a Zoom interview. “I learned how much nuance there is, and how many very small moments, words, phrases can hold such meaning.” 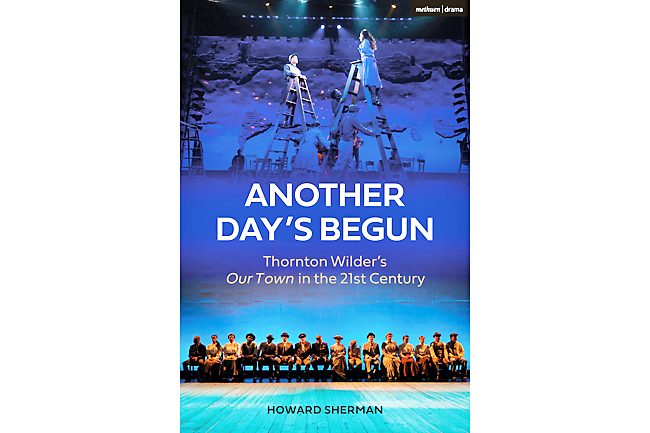 With the country splintered, its institutions shaken, a book documenting a classic American play affirming shared life experiences and bedrock values seems especially timely. Published on Thursday, Another Day’s Begun: Thornton Wilder’s ‘Our Town’ in the 21st Century is an oral history of a dozen or so recent productions of this famously stoical and spare play. It’s a drama so scrubbed of artifice that the first stage directions in the script are: “No curtain. No scenery.”

Sherman conducted more than 100 interviews with directors and actors – from Oscar winners such as Helen Hunt to inmates at Sing Sing Correctional Facility – for an exploration of Our Town’s extraordinary, enduring impact.

“I just wanted to let people hear the voices of these people who, I’m fond of saying, lived in Grover’s Corners for a while,” Sherman said, invoking the name of the fictional town – Pop. 2,642 – in which the play is set, in the early 20th Century. Wilder’s three-act survey of life and death in a small town is so durable that it remains one of the nation’s most oft-produced plays, and it has been translated into 80 languages. The last time it was done on Broadway, in 2002 – one of its five incarnations there – the Stage Manager was played by none other than Paul Newman. And plans are in the works for a production with Dustin Hoffman as the narrator when Broadway re-opens.

Sherman, an erstwhile theatre publicist, had been looking for a classic play around which he might construct a production history. He had been taken with a celebrated off-Broadway version of Our Town directed by David Cromer a dozen years ago, and more recently found himself deeply touched by one directed by Kate Powers at Sing Sing, cast entirely with inmates. When he discovered that no such book existed about Our Town, he decided it would be an intriguing springboard for inquiry.

“The bottom line is, why this play?” he said. “Why does this play get done at every level, from junior high to major professional productions? Why has this play been done around the world, virtually from the time it was written? So, what’s there, and who better than artists who are interpreting the work to say what was there?”

Why indeed Our Town? It doesn’t exactly provide belly laughs or edge-of-your-seat thrills. As Mr Webb, the town’s newspaper editor, puts it: “Very ordinary town, if you ask me. Little better behaved than most. Probably a lot duller.”

Following the comfortable rhythms of the Webb and Gibbs households through two acts – and culminating in the wedding of Emily Webb to George Gibbs – the play feels like a template for the warm family sitcoms of the 1950s.

And then, in Act 3, it takes off in a metaphysical direction, as the plot moves ahead in time and shifts to several characters now deceased and seated in the town cemetery. They are, as the saying goes, speaking from beyond the grave. It’s clear that one of them, Emily, who has recently died in childbirth, can’t let go of her past and, granted a last chance to revisit her life, learns a heartbreaking truth that often leaves Our Town audiences in tears.

Sherman believes it is the recognition of mortality that drives the proceedings: “You start hearing about death within the first couple of paragraphs,” he said. But other meanings are illuminated in his book and may also shed light on why Our Town remains a play for our time. The drama is protean, its portraits and format adaptable in ways that Wilder himself could not have foreseen. (The original Broadway production ran for 336 performances, from February to November 1938).

In 2017, for instance, Jane Kaczmarek played the Stage Manager in a production by Deaf West Theatre and the Pasadena Playhouse, alongside deaf actress Alexandria Wailes.

“It was a revolutionary idea,” said Kaczmarek, a Yale School of Drama graduate best known as the mom on Fox’s Malcolm in the Middle. Kaczmarek, one of the dozens of actors Sherman recorded, said that sharing this central role with a deaf actor felt disruptively positive: They had to rely entirely on each other.

At the time, Donald Trump had become president, Kaczmarek recalled in a telephone interview, “and there was this idea in the production of taking the time to look at each other, to talk to each other, which made it the perfect play to do”.

For Wailes, the Our Town experience deepened her understanding of what might seem the most transparent of depictions of everyday life.

“Working on Deaf West’s and Pasadena Playhouse’s Our Town revealed and reminded me of the simpler truths of existence,” Wailes said. “Well, life isn’t exactly simple, but I definitely found myself leaning into how timeless certain human wants and needs are.”

Sherman’s march through recent theatre history inevitably provided a canvas of how diverse the casting of Our Town could be. Part of what keeps a classic fresh is its ability to re-form to the contours of society in flux. Thusly, the same year as the Deaf West/Pasadena Playhouse production, Miami New Drama produced a version directed by Michel Hausmann with Black actor Keith Randolph Smith in the lead.

“This quintessential American play is not usually done with an African American actor as the Stage Manager,” Smith said in a phone interview. Playing to an audience that drew from Dade County’s vast Cuban American and Haitian American communities, the production included Spanish and Creole surtitles. Smith said it affected him deeply to see how moved audiences could be, even far from the time and place of Our Town“.