The week-long royal wedding of Her Royal Highness Princess ‘Azemah Ni’matul Bolkiah and Yang Amat Mulia Pengiran Muda Bahar ibni His Royal Highness Prince Haji Jefri Bolkiah, steeped in centuries-old tradition, left new members of the diplomatic corps in awe. Canadian High Commissioner to Brunei Darussalam Ambra Dickie said, “It was an honour to be invited to the wedding festivities to witness a royal wedding in person for the first time as we would only witness these events on television and in the movies!”

The wedding events helped her to understand Bruneian traditions and history better.

“Canada is also a monarchy. So it is not unknown to us to have some amount of ceremony and regalia. But the wedding events showed me a new set of traditions and symbolism,” the high commissioner said.

She particularly enjoyed the opportunity to witness the gift exchange ceremony and the various types of symbolism such as “the roles of the children in the ceremony, and the meaning behind each of the different gifts”.

The various events showed the envoy Islamic wedding traditions, “something I had not have the opportunity to experience before”, she said. “All of the costumes, traditional shields and weapons are the sort of things that would usually be seen in museums.

“Here we are today, seeing them in real life. So it has been a really wonderful learning experience,” she added. 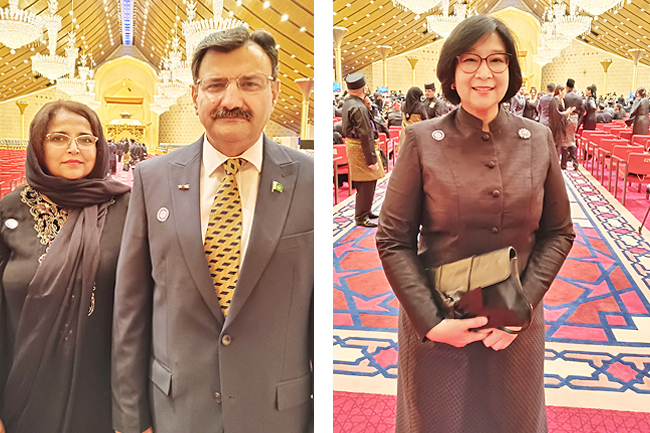 “I witnessed the exchange of gifts ceremony, the royal powdering ceremony and the royal wedding reception ceremony. I saw them showcase the old and beautiful tradition in which Bruneians must be proud of. “I do find some similarities in a wedding ceremony between Brunei and Laos,” she said.

The most exciting moment for her was when the royal bride and groom sat together. She believed that the royal wedding was an exciting celebration for both the diplomatic corps and citizens.

Meanwhile, Pakistani High Commissioner to Brunei Darussalam Major General (Rtd) Farhat Abbas Sani said, “It has been a pleasure and an honour for my wife and I to attend the royal wedding. We were really excited for it.”

He added that they enjoyed all the ceremonies – the arrangements and ambience were spectacular with some of the events being very similar to Pakistani ceremonies.

The most interesting ceremony for him and his spouse was the Istiadat Berbedak Pengantin Diraja ceremony which he found to be organised and impressive.

“It is my great privilege and honour to have been invited, representing my country and Thais in Brunei Darussalam,” she said.

“The ceremonies were solemn yet heartwarming, showcasing religion as the guiding principle, richness in Malay tradition, culture and customs and I can relate to the feeling of pride and joy among Bruneians.”