INSIDE SAN QUENTIN STATE PRISON, California (AP) – Stefan Schneider needed a nickname, or a handle as they call it in prison.

So the inmates quickly began brainstorming for the college tennis player making his first visit to San Quentin.

“Twinkle Toes,” suggested another inmate named Kenny, who preferred not to give his last name out of respect for his victim’s family.

“Twinkle for short,” Tennison said with a grin. “We couldn’t give him a hardcore one because he looks like such a nice kid.”

Later, ‘Ten’ beamed and clapped as the now-20-year-old Schneider showed everyone his strong game.

“See, I knew you were taking it easy,” Tennison said emphatically. 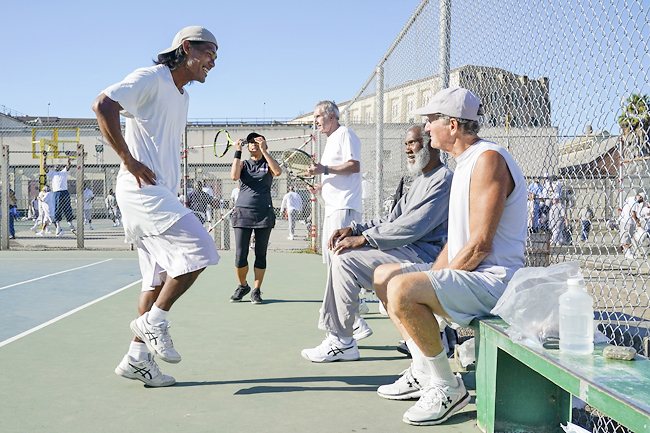 For a few hours, these prisoners were just tennis players out for some competitive fun and a chance to forget their life behind bars for a little while – even with the cell blocks in view at every direction.

Hundreds of inmates fill San Quentin’s sprawling exercise yard every Saturday morning to work out in all ways – walking lunges, chin-ups, pull-ups and push-ups, jabs into a punching bag, abdominal moves, even bench-pressing picnic tables. There are basketball and baseball games going simultaneously in the space some three football fields in size.

Every corner is filled with activity and energy. Others wait their turn for haircuts or to play checkers, dominoes and horseshoes.

A single tennis court sits on one side of the grounds, its back fences so close to the lines that a well-placed lob will send someone crashing into the chain links with little chance at keeping a point alive. A half-dozen regulars start playing at straight up 8am.

“Are you ready, Ten?” hollered inmate James Duff, beaming. He picked up tennis only last August and already was a highly skilled player.

Tennison – who noted “you’ll never believe my last name, I was meant to play”- cherished the chance to be back on the court. The six-foot-three lefty began playing tennis in high school at 16.

“I would have kept playing but I got into legal trouble,” said Tennison, who also writes poetry and performs in prison Shakespearean plays. “I just have a supreme love for it, I love it. I’m just grateful to be somewhere I can play.”

The close-knit tennis crew gathers at every chance, many of them aiming to get out on the court every day, typically after their work shifts or college courses. They are thrilled to be outside again after almost constant lockdown for two-and-a-half years during the pandemic.

“It gives us a piece of community to get out of the mode of prison drudgery,” said San Quentin’s tennis team captain Earl Wilson who has been incarcerated since 1985 – about 37 of his 60 years. “It gives us a sense of family. People love coming in and say it’s better coming in here because we don’t argue.”

That’s because they have their own tennis etiquette: Any close balls are typically called in to avoid confrontation.

That’s not to say there’s no trash talk. When he’s not playing baseball nearby, Kolby Southwood might join the tennis group and razz Matt ‘Doc’ Montana by calling him ‘Grandpa’ and slicing a short ball to make Montana run.

An ex-tennis pro and key leader in the players’ improvement, Montana easily holds his own. The 67-year-old former chiropractor is from the Bay Area and taught for 30 years. He has spent countless hours with some of the inmates, guiding them in fundamentals while always sending newcomers to the hitting wall so they can develop some rhythm on their own.

“I give these guys some tips to try to help them out,” said Montana, who stretches and does yoga on the court, too. “It’s been very difficult with the pandemic. We’ve had lockdown after lockdown.”

Montana, who has been in San Quentin for three-and-a-hlaf years and takes sociology and psychology classes, is so grateful to have the court.

“When the bus came here and I saw the tennis court, I was like, ‘Ahhh’,” he recalled.

Patrick Leong helps run the ‘Inside-Outside’ programme by coordinating those volunteer visiting players like Schneider to play doubles with the San Quentin inmates. An English professor at Diablo Valley College, Leong also plays. He sports an old-school headband, and the inmates cheer fondly for their friend ‘Alley Pat’ – the handle a nod to his precise accuracy down the lines.

Schneider and his mother, Margie Moran – a longtime tennis player from the East Bay suburb of Alameda who plays on several USTA teams at once – were some of the first visitors allowed into San Quentin for this programme as pandemic restrictions lifted.

The experience for those who are invited into the prison to participate is often life-changing, providing a profound glimpse into what it’s like for a population that is largely forgotten.

“I wasn’t expecting anything like that… there are so many of them all in one place,” Schneider said. “I really liked how they found a community for tennis with those 10 guys, and it seemed like they were having a lot of fun. They obviously are really good for the amount of time they’ve played, so it was pretty cool to see.”

Wilson restrings the rackets, runs tennis team tryouts and is accountable for equipment.

He loves the days when players come in to give the San Quentin team much-needed competition. It brightens up the monotony of prison life.

Wilson’s mom introduced him to tennis at around age seven. Yet he always stuck with the major sports growing up – football, basketball and baseball, which “conflicted with tennis” in the spring. Wilson hopes to one day play beyond the walls again.

“Keep learning, keep healthy and get to my mother before she passes,” he said of what keeps him going after nearly four decades inside.

Fist bumps. Rackets clinking to celebrate good shots or to encourage for the next chance. It felt an awful lot like a friendly day of tennis that could have been at any public park instead of inside these prison walls.

At the end of a two-and-a-half-hour session on that sunny and warm mid-August morning, with a modest speaker under the bench quietly playing classic rock, Wilson brought the group together for a team huddle, “One, two, three, Inside-Outside tennis!”

They said their goodbyes, and the visitors made their way out the prison gates, only to see each other again in two weeks.

By then, Ten had practiced to take on Twinkle Toes – and the inmate proudly hit an ace serve past Schneider.

“I accomplished my goal! I aced Stefan!” he announced.

“It made his day,” Moran said, overjoyed for Tennison’s feat.

So, how about a nickname for Twinkle’s mum, Moran?

A smiling Ten just shrugged, put a finger to his head as if pondering, then exhaled, “These things take time.”