THE STAR – Malaysian celebrity couple Noor Neelofa Mohd Noor and her husband Muhammad Haris Mohd Ismail have been given a discharge not amounting to an acquittal (DNAA) by the Magistrate’s Court for allegedly violating standard operating procedures (SOP) during the conditional movement control order in May.

Magistrate Mohd Firdaus Saleh made the decision yesterday after the defence team told the court that the Attorney General’s Chambers was prepared to offer compound notices for the three offences allegedly committed by the couple.

Neelofa, 32, and Muhammad Haris, 26, pleaded not guilty on May 20 to a charge of failing to scan their details via the MySejahtera application or to register manually before entering a carpet shop located at the Nilai 3 Industrial Area at 4pm on May 2.

Muhammad Haris also claimed trial to another charge of failing to wear a face mask in a public place at the same place and time.

They were charged under Rule 19 of the Prevention and Control of Infectious Diseases Regulations (conditional movement order) 2021, which provides a fine of not more than MYR50,000, or a jail term of not more than six months, or both, upon conviction.

The couple was represented by Muhammad Shafee Abdullah, Haresh Mahadevan and Ramzani Idris. 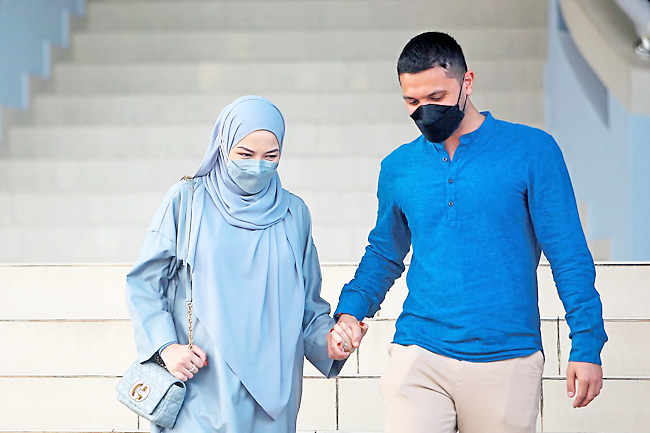