NCDs cause of two-thirds of premature deaths

Over two-thirds of premature deaths (deaths before 70 years) in the Sultanate are caused by non-communicable diseases (NCDs) with the most common being cardiovascular diseases, diabetes, chronic respiratory diseases and cancer.

During the pandemic, nearly all COVID-19 fatalities were in patients with NCDs or risk factors.

Over three-quarter of those with severe COVID-19 symptoms had NCDs or risk factors.

The concerns of NCDs in the Sultanate were highlighted by Head of the Non-Communicable Diseases Prevention Unit Dr Ong Sok King at the opening ceremony of the 3rd National Health and Nutritional Status Survey (NHANSS) in Brunei Darussalam STEPS survey (ADULTS) Component 2022-2023 training workshop for fieldwork research assistants.

During her presentation on the introduction to the STEPS survey in Brunei Darussalam, Dr Ong cited that the Sultanate’s population pyramid shows that the pyramid base has been shrinking from 2001 to 2020, where the younger population is reducing and the older population is increasing.

“Over the past five decades, we have seen changes in the 10 leading causes of death in Brunei Darussalam, shifting from dominantly communicable diseases to NCDs,” she said. 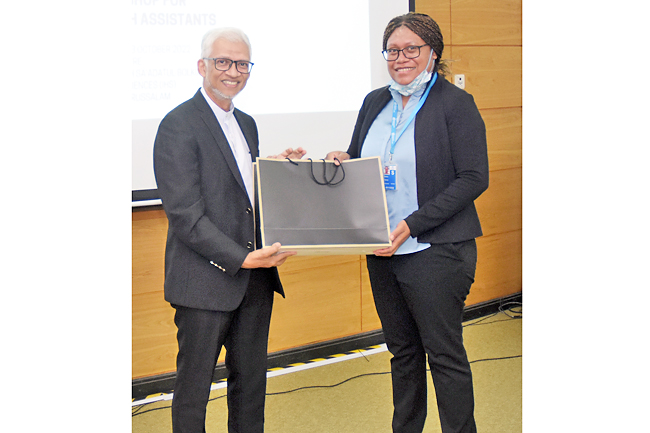 “Chronic diseases are commonly linked to four key factors which are lifestyle-related and modifiable – tobacco smoking, unhealthy diet, physical inactivity and alcohol use.

“An unhealthy diet of high intake of sugar, salt and saturated fat can contribute to high blood pressure, obesity, diabetes, cancer of the breast, colon and uterus, heart diseases, stroke and liver diseases. Being physically active reduces the risk of chronic diseases of NCDs,” she added.

On the upcoming 3rd NHANSS, she said, “The first step is face-to-face interviews, with the second step involving physical measurement and the third step is biochemical measurement. The training workshop will go through details of the questionnaire and measurements.”

The 3rd NHANSS has been extended to include nine questions on mental health to assess the risk of depression. Participants can complete the PHQ-9 themselves.

Meanwhile, Technical Officer under Surveillance, Monitoring and Reporting, Non-Communicable Diseases Department, WHO Dr Patricia Rarau said, “The objectives of STEPS are to gather information on NCD risk factors to help plan programmes and interventions; collect standardisation of risk factor data to enable comparisons, but allow flexibility; provide an entry point for low and middle income countries to get started on NCD surveillance; and build capacity in countries as well as an integrated approach and therefore relatively low cost.”

On the reasons for measuring risk factors, she said, “The risk factors have the greatest impact on NCD morbidity and mortality. Modification is possible through effective prevention, measurement of risk factors proven to be valid, measurements can be obtained using appropriate ethical standards and once risk factor levels are known, the information can be used to set up NCD interventions and programmes.”

The workshop is aimed to ensure that trained researchers involved in conducting the survey for NHANSS-3 know the basic methodology.

The workshop is divided into two parts – to equip trained researchers with skills and knowledge on the process of collecting data, interview participants and the approach applied as well as training in the use of eSTEPS on Android tablets used during the interviews.

Some 60 participants joined the workshop comprising trained researchers, students and members of the academician from PAPRSB IHS, UBD and officials from the MoH.

The 3rd NHANSS has two phases. The first phase will be conducted from October 2022 to January 2023 focussing on general risk factors among adults aged 18 to 69. The second phase will be from February to May 2023 targetting issues related to children and pregnant women’s health.

Fieldwork research assistants and student volunteers will be deployed in both phases to visit households nationwide for interviews and to conduct tests.