BANG! NEWS – A search for Naya Rivera in cabins by Lake Piru proved fruitless, with investigators admitting they think she died in a “tragic drowning”.

The former Glee actress went missing while out boating in Lake Piru with her four-year-old son Josey last week and despite the focus last Sunday’s searches being the surrounding shoreline, investigators have no reason to think she ever “left the water”.

Sergrant Shannon King told People magazine: “The [cabins were] not occupied. Nothing came of it.

“They were just doing the shoreline to make sure nothing changed. There were a lot of folks that were talking on social media about, ‘Oh, check the cabins. Maybe she’s there, maybe she’s hanging out.’ They did go to a couple of the cabins that were on the north end of the lake, that’s all that’s out there, and nothing came of it.

“There’s no evidence to say she left the water. It appears to be 100 per cent just a tragic drowning.” Authorities will continue using dive boat and search and rescue teams, as well as scanning sonar for “visual surface checks” of the water as they continue to hunt for Naya’s body.

The officer added, “It’s not like typical waters, which are crystal clear, this is murky, cold lake water.

“The ground is covered in trees and shrubs, so it’s hampering our efforts for sure. So they have to go very slowly, so when they see the sonar vision coming back on their screen, the slower they go, the clearer it is.

“The faster they go, the more elongated it becomes and harder to tell.”

Search teams will continue working until “at least” today. 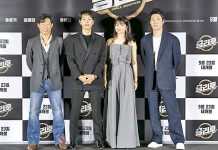