WASHINGTON (AFP) – For countless generations prior to European colonisation, Canada’s Indigenous people relied on caribou both as a source of subsistence and as an integral part of their cultural practices.

Hunting and butchering the animal in frigid temperatures was long seen as a rite of passage, and members of the First Nations were the first to detect their serious decline.

“Fundamentally we are people of caribou,” director of Canada’s Indigenous Leadership Initiative and a member of the Innu nation Valerie Courtois told AFP. “Caribou is what has really enabled us to survive, and to be who we are.”

Today the species, which is known as reindeer outside North America, is endangered across much of Canada as a result of widespread habitat destruction from logging, roadbuilding, construction of transmission lines and more.

But an innovative pilot programme led by Indigenous people might show a path to wider recovery. The case highlights the value of Indigenous stewardship in protecting ecosystems that benefit all humanity.

As detailed in a March 2022 paper in Ecological Applications, the Klinse-Za subpopulation of caribou in British Columbia were once so plentiful they were described as “bugs on the landscape” but by 2013 had dwindled to just 38 animals. 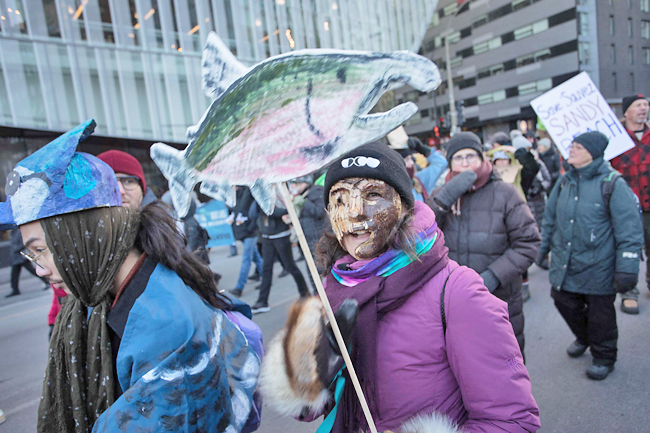 That year, the First Nations of West Moberly and Saulteau devised a plan that saw them first cull wolves to reduce caribou predation, then added a maternal pen-fenced enclosures for females to birth and raise calves.

Their efforts saw the number of caribou of the herd triple in the area from 38 to 114.

With the threat of localised extinction averted, the two nations signed an agreement in 2020 with the governments of British Columbia and Canada to secure 7,900 square kilometres of land for caribou, hoping to eventually revive their traditional hunt.

“When you protect caribou, a lot of animals come along for the ride,” conservation scientist with nonprofit Nature United Ronnie Drever told AFP.

“Good caribou conservation is also climate action,” he added, because the old-growth forests and peatlands they live on are invaluable carbon sinks.

Globally, Indigenous people own or use a quarter of the world’s land, but safeguard 80 per cent of remaining biodiversity – testament to centuries of sustainable practices that modern science is only just starting to understand.

A paper published this October in Current Biology looked at tropical forests across Asia, Africa, and the Americas, finding those located on protected Indigenous lands were the “healthiest, highest functioning, most diverse, and most ecologically resilient”.

A 2019 paper in Environmental Science & Policy analysed more than 15,000 areas in Canada, Brazil and Australia.

It found that the total number of birds, mammals, amphibians and reptiles were highest on lands managed or co-managed by Indigenous communities.

Protected areas like parks and wildlife reserves had the second highest levels of biodiversity, followed by areas that were not protected.

“This suggests that it’s the land-management practices of many Indigenous communities that are keeping species numbers high,” said lead author Richard Schuster, in a statement.

Lawyer and biodiversity expert with the International Indigenous Forum on Biodiversity Jennifer Tauli Corpuz, of the Kankana-ey Igorot people of the Philippines stressed that collaborative efforts were crucial.

“Conservation does not have a good history with Indigenous peoples, it’s resulted in displacement,” she told AFP.

National parks established on Euro-American notions that the land was once pristine “wilderness” typically prohibited Indigenous peoples from exercising their customary land uses, and forcibly displaced many from their ancestral homes.

Instead, she said, the rights of Indigenous groups need to be woven into the fabric of the new global biodiversity deal – including a cornerstone pledge to protect 30 per cent of land and water by 2030. Indigenous groups said they should have greater autonomy to take the lead as managers of protected areas, arguing their successful record demonstrates they can pursue economic activity sustainably.

“The current biodiversity crisis is often depicted as a struggle to preserve untouched habitats,” said a study published last year in the Proceedings of the National Academy of Sciences, which found that areas untouched by people were almost as rare 12,000 years ago as they are today.

“Current biodiversity losses are caused not by human conversion or degradation of untouched ecosystems, but rather by the appropriation, colonisation, and intensification of use in lands inhabited and used by prior societies,” it concluded.