Hiking enthusiasts in the country looking for another location to explore with family and friends need look no further than the Adin Bisa hiking track in Kampong Tanjong Nangka.

Built around a well rich in mythology, the hiking trail features has three wasai (waterfalls), one well and several hills. Two tracks have been paved for hikers looking to reach the summit. The first track is 3.8 kilometres across three hills. The second track is 5.1 kilometres and is more challenging, with the addition of two to three hills and one small river en route.

In the event of any unforseen circumstances, the track features a shortcut for cars to access the place during an emergency.

The name Adin Bisa is taken from the history of a well called Telaga Adin Bisa.

There is a lore associated with the origin of Telaga Adin Bisa. 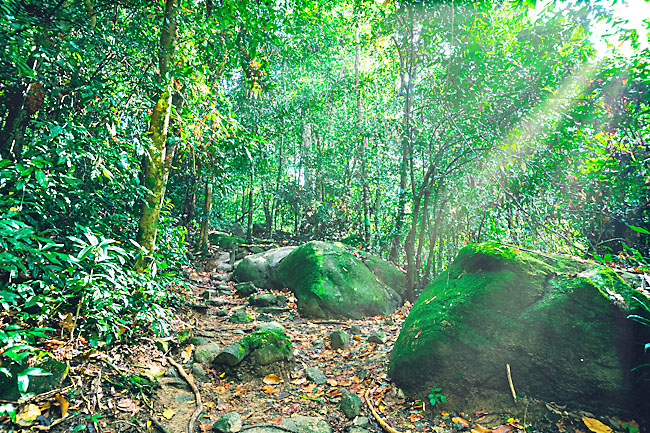 According to the legend, if you drink from or bathe in the water from the well, it will cure all diseases.

The book The Golden Warisan Brunei Darussalam Volume 2 by Rozan Yunos detailed that once upon a time there were three siblings who lost their mother after she gave birth to the youngest child.

The eldest brother was Raden, followed by Ugang and Musa.

One day, while their father was planting sugarcane, he came across a plant growing in a blazing fire called Pohon Balik Angin. It was said to bring good luck to those who were in possession of it.

Their father divided the plant into three parts – Raden got the roots, Ugang the stalk, while Musa the leaves.

Their father suggested that they consumed their shares.

When the siblings were grown-ups, Raden was the most feared person in the village because his body could poison anyone outside of his family by mere touch.Wherever he roamed, the grass would die and the fish in the river too. Since then, he was known as Raden Bisa.

Ugang, meanwhile, became a strong man while Musa a hardworking person. Both left the village to earn a living.

Since Raden Bisa’s body could poison people and the surrounding, he decided to leave his village and retreated into the forest.

Eventually, loneliness got the better of him, and asked his siblings to end his life.

His siblings were reluctant to fulfil the request but Raden threatened to kill everyone in the village if his wish was not granted.

Raden Bisa did die in the end, with a spear to his chest near a lake. Some said Ugang was the one who ended Raden’s life.

In life, Raden’s body was a posion to all. But in death, his body turned the well into a healing reservoir that can cure all diseases.

And the very well still sits in in Kampong Tanjong Nangka today.