THE WASHINGTON POST – “I know a lot of you white people have never seen an Indian do stand-up comedy before,” joked Charlie Hill on The Richard Pryor Show in 1977. “Like, for so long you probably thought that Indians never had a sense of humour. We never thought you were too funny either.”

Hill’s TV debut, making him the first indigenous comedian in prime time, is one of the milestones that Kliph Nesteroff chronicles in We Had a Little Real Estate Problem, an illuminating and stereotype-busting history of Native Americans and comedy.

Nesteroff profiles Hill, who died of cancer in 2013, as well as other indigenous comedians whom Hill influenced in much the same way Freddie Prinze and Eddie Murphy inspired Latin and Black comics with their phenomenal success at a young age.

But at its heart, Nesteroff’s book shows “the importance and influence that proper representation in the media can have”, the author said in a phone interview. “Nine out of 10 indigenous comedians to whom I talked said that Charlie Hill was the guy. Whether they started in the 1980s, the 90s or the 2000s, they said that they never knew there were other Native American comedians, and when they saw Charlie Hill on TV, that was the moment they decided they wanted to get into comedy.”

We Had a Little Real Estate Problem takes its title from Hill’s most famous joke: “My people are from Wisconsin. We used to be from New York. We had a little real estate problem.” The book is a welcome addendum to Nesteroff’s critically acclaimed history of American stand-up comedy, The Comedians, which was published in 2015. Michael Sims, reviewing it for The Washington Post, called it “an insightful overview of the most independent and subversive entertainment genre of the last century”. 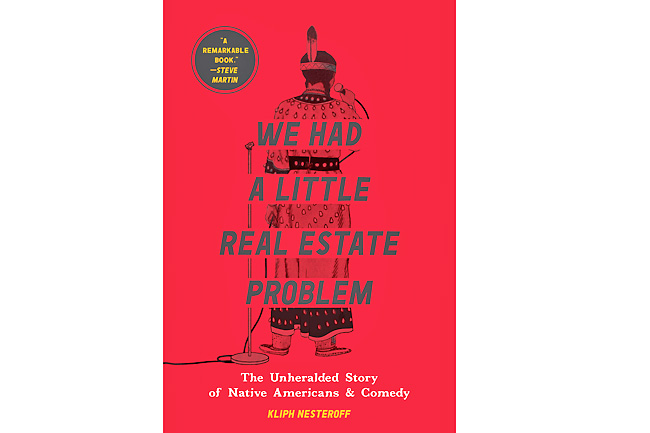 Nesteroff, an encyclopaedic comedy historian, said “racism and fascism were on the rise when I got the (book) deal in early 2018. I was trying to figure out what I could do to counteract that in some positive and meaningful way, and writing a book that would give non-native people a proper historical perspective was one way of doing that”.

Although Nesteroff, who is White, was approached to write the book, he was cognisant of Hollywood’s poor track record of putting indigenous people in positions of ownership to tell their own stories. When it came to writing the book, he made a commitment to his subjects by getting out of the way. “As much as possible, I tried not to inject myself so there are several chapters of contemporary Native American comedians speaking in their own voice and being quoted verbatim,” he said.

One of those voices is Terry Ree, a Lakota comedian who, with Bruce Williams, is part of the popular comedy duo also known as Williams and Ree. They entrusted the story of their more than 50-year career to Nesteroff, who chronicles the evolution of their “white guy and the Indian” act. In a joint phone interview, the pair said the indigenous comedian is an essential, albeit unsung story.

“It’s about time people realised there are Indians out there working,” Ree said wryly.