In parking lots, on flatbed trucks, hospital courtyards and rooftops, private generators are ubiquitous in parts of the Middle East, spewing hazardous fumes into homes and businesses 24 hours a day.

As the world looks for renewable energy to tackle climate change, millions of people around the region depend almost completely on diesel-powered private generators to keep the lights on because war or mismanagement have gutted electricity infrastructure.

Experts call it national suicide from an environmental and health perspective.

“Air pollution from diesel generators contains more than 40 toxic air contaminants, including many known or suspected cancer-causing substances,” said managing director and co-founder of the Environment Academy at the American University of Beirut in Lebanon Samy Kayed. 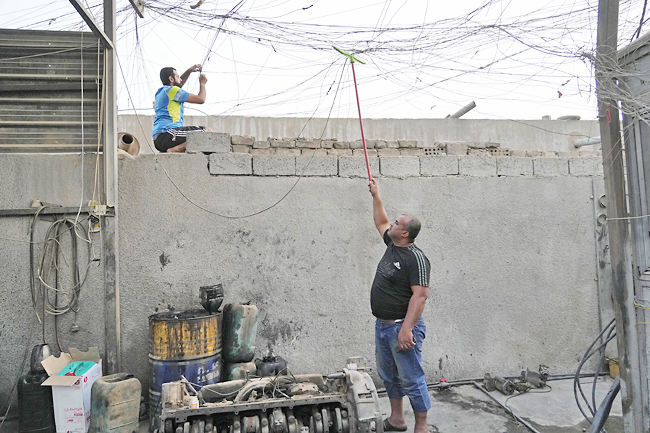 Since they usually use diesel, generators also produce far more climate change-inducing emissions than, for example, a natural gas power plant does, he said.

The pollutants caused by massive generators add to the many environmental woes of the Middle East, which is one of the most vulnerable regions in the world to the impact of climate change. The region already has high temperatures and limited water resources even without the growing impact of global warming.

The reliance on generators results from state failure. In Lebanon, Iraq, Yemen and elsewhere, governments can’t maintain a functioning central power network, whether because of war, conflict or mismanagement and corruption.

Lebanon, for example, has not built a new power plant in decades. Multiple plans for new ones have run aground on politicians’ factionalism and conflicting patronage interests. The country’s few ageing, heavy-fuel oil plants long ago became unable to meet demand.

Iraq, meanwhile, sits on some of the world’s biggest oil reserves. Yet scorching summer-time heat is always accompanied by the roar of neighbourhood generators, as residents blast ACs around the clock to keep cool.

Repeated wars over the decades have wrecked Iraq’s electricity networks. Corruption has siphoned away billions of dollars meant to repair and upgrade it. Some 17 billion cubic metres of gas from Iraq’s wells are burnt every year as waste, because it hasn’t built the infrastructure to capture it and convert it to electricity to power Iraqi homes.

In Libya, a country prized for its light and sweet crude oil, electricity networks have buckled under years of civil war and the lack of a central government.

“The power cuts last the greater part of the day, when electricity is mostly needed,” said owner Muataz Shobaik of a butcher shop in the city of Benghazi, in Libya’s east, who uses a noisy generator to keep his coolers running.

“Every business has to have a backup off-grid solution now,” he said.

Diesel fumes from his and neighbouring shops’ machines hung thick in the air amid the oppressive heat.

The Gaza Strip’s 2.3 million people rely on around 700 neighbourhood generators across the territory for their homes. Thousands of private generators keep businesses, government institutions, universities and health centres running. Running on diesel, they churn black smoke in the air, tarring walls around them.

Since Israel bombed the only power plant in the Hamas-ruled territory in 2014, the station has never reached full capacity. Gaza only gets about half the power it needs from the plant and directly from Israel. Cutoffs can last up to 16 hours a day.

Perhaps nowhere do generators rule people’s lives as much as in Lebanon, where the system is so entrenched and institutionalised that private generator owners have their own business association.

They are crammed into tight streets, parking lots, on roofs and balconies and in garages.

Some are as large as storage containers, others small and blaring noise.

Lebanon’s five million people have long depended on them. The word moteur, French for generator, is one of the most often spoken words among Lebanese.

Reliance has only increased since Lebanon’s economy unravelled in late 2019 and central power cut-offs began lasting longer. At the same time, generator owners have had to ration use because of soaring diesel prices and high temperatures, turning them off several times a day for breaks.

So residents plan their lives around the gaps in electricity.

Those who can’t start the day without coffee set an alarm to make a cup before the generator turns off. The frail or elderly in apartment towers wait for the generator to switch on before leaving home so they don’t have to climb stairs. Hospitals must keep generators humming so life-saving machines can operate without disruption.

“We understand people’s frustration, but if it wasn’t for us, people would be living in darkness,” said Ihab, the Egyptian operator of a generator station north of Beirut.

“They say we are more powerful than the state, but it is the absence of the state that led us to exist,” he said, giving only his first name to avoid trouble with the authorities.

Siham Hanna, a 58-year-old translator in Beirut, said generator fumes exacerbate her elderly father’s lung condition. She wipes soot off her balcony and other surfaces several times a day.

“It’s the 21st Century, but we live like in the stone ages. Who lives like this?” said Hanna, who does not recall her country ever having stable electricity in her life.

Some in Lebanon and elsewhere have begun to install solar power systems in their homes.

But most use it only to fill in when the generator is off. Cost and space issues in urban areas have also limited solar use.

In Iraq, the typical middle-income household uses generator power for 10 hours a day on average and pays USD240 per megawatt hour, among the highest rates in the region, according to a report by the International Energy Agency.

The need for generators has become engrained in people’s minds. At a recent concert in the capital, famed singer Umm Ali al-Malla made sure to thank not only the audience but also the venue’s technical director “for keeping the generator going” while her admirers danced.

As opposed to power plants outside urban areas, generators are in the heart of neighbourhoods, pumping toxins directly to residents.

This is catastrophic, said Najat Saliba, a chemist at the American University of Beirut who recently won a seat in Parliament.

“This is extremely taxing on the environment, especially the amount of black carbon and particles that they emit,” she said. There are almost no regulations and no filtering of particles, she added.

Researchers at AUB found that the level of toxic emissions may have quadrupled since Lebanon’s financial crisis began because of increased reliance on generators.

Similarly, a 2020 study on the environmental impact of using large generators in the University of Technology in Baghdad found very high concentrations of pollutants exceeding limits set by the United States’ Environmental Protection Agency and the World Health Organization.