THE WASHINGTON POST – Modern classicists are blowing up traditional notions about ancient narratives and sparking renewed interest in the mythological women whose dramas often play out in the shadows of their male counterparts.

Rock-star mythologist Natalie Haynes, like Madeline Miller, whose Circe retells the story of the witch at the centre of The Odyssey, reboots ancient epics with fresh perspectives. Haynes’ highly praised 2017 novel, The Children of Jocasta, reimagines two Sophocles tragedies, and her most recent myth-based novel, A Thousand Ships, is equally provocative. Reimagining source material from Virgil, Homer, Euripides and others, Haynes delivers a sparkling narrative about the Trojan War that will appeal to fans of Game of Thrones as well as die-hard mythology nerds.

Haynes, a former stand-up comedian and host of the BBC series Natalie Haynes Stands Up for the Classics, retells these stories with a comic flourish and vividly renders battle scenes, family dramas and ranting gods and goddesses. A Thousand Ships, published in Great Britain in 2019, was shortlisted for Britain’s Women’s Prize for Fiction and was lauded for its subversive, feminist spin. And Haynes makes problems in the Bronze Age feel so much like now. Sex trafficking, corrupt leaders and the despoiling of the Earth are some of the timeless challenges Greeks and Trojans faced during that era.

A Thousand Ships – a reference to the 1,000 ships the Greeks sent to Troy in the run-up to the decade-long war – begins with Calliope, the muse of epic poets, bemoaning Homer’s whiny pleas for inspiration as he writes his male-centric tales. Her snide comments make clear that she, not Homer, will tell this story. “Does he believe I have nothing else to do with my time than sit around being his muse? His. When did poets forget that they serve the muses, and not the other way around?” 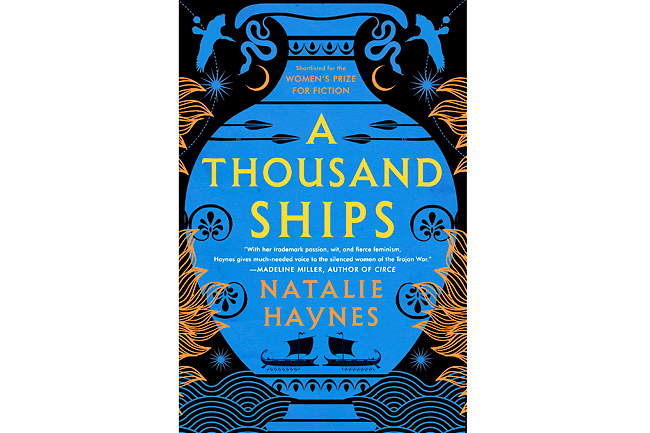 Calliope’s narrative pays scant attention to the Trojan Horse and the celebrated beauty, Helen of Troy, and focuses more on war’s victims: “If (Homer) truly wants to understand the nature of the epic story I am letting him compose, he needs to accept that the casualties of war aren’t just the ones who die. And that a death off the battlefield can be more noble (more heroic, if he prefers it that way) than one in the midst of fighting.” She’s referring to the acute suffering of women as they mourn their dead husbands and sons and the abuse of their daughters and themselves as they become spoils of war. “When a war was ended, the men lost their lives. But the women lost everything else.”

A Thousand Ships does more than acknowledge the suffering of women. It tells in lively fashion gripping tales of bravery, treachery and revenge. There are the tantrum-throwing deities who plot to incite the Trojan War (they decided against a plague to kill the masses, choosing instead to use the Spartan Helen’s adultery to spark a war with a high body count); Penelope’s aggravation and struggles to protect her kingdom as she waits decades for Odysseus’s return from the war; the fearless Amazon princess Penthesilea who fights to the death against Achilles; and the bravery that the Greek princess Iphigenia shows before she’s murdered by her father, Agamemnon. Nothing tops a scene of incredible violence in which her mother, Clytemnestra, kills Agamemnon to avenge her death. There are more than 50 characters in the novel, but, mercifully, Haynes provides us with an easily referenced list.

A Thousand Ships blows the dust off the classics and as Calliope reminds us in its closing pages: “I have picked up the old stories and I have shaken them until the hidden women appear in plain sight. I have celebrated them in song because they have waited long enough.” It’s a timely notion as the modern world reckons with who gets to tell the stories of its diverse populations.