AP – Naomi Watts had some reservations about remaking the Austrian horror Goodnight Mommy.

The 2014 film from directors Veronika Franz and Severin Fiala about twin boys who start to suspect that their mother, covered in surgical bandages, is not really their mother had achieved a kind of cult status.

It was the kind of cred that made it both a perfect candidate for an English-language remake and also one that made everyone nervous: What if they messed it up?

“The original, to me, is a pretty perfect film in my book,” Watts said. “Why would we do another one?”

But director Matt Sobel didn’t want to do a shot-for-shot remake.

He had another idea, a reimagining of sorts that would illuminate different themes in the story.

“I’m not a fan of just remaking something because people are too lazy to read subtitles,” Sobel said. 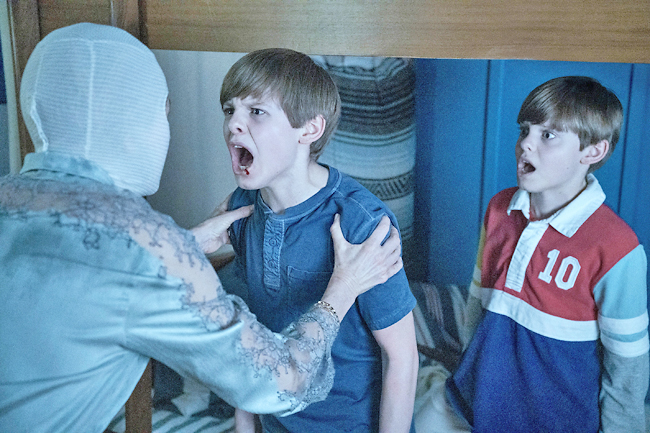 “I would always say, similar to how a restaging of The Taming of the Shrew with the genders reversed means something different, our story should mean some-thing unique.”

To play the twins, Elias and Lukas, the filmmakers decided on Cameron and Nicholas Crovetti, the 14-year-old identical twin brothers who played Nicole Kidman’s sons in Big Little Lies.

The Crovettis were excited about the project. “We used to be like really obsessed with horror films,” said Nicholas Crovetti, who plays Lukas. “I mean we still are.”

Still, liking the idea of a psychological thriller and acting in one are different things. Watts and Sobel made it a priority to make sure the young actors, and their mother, were okay on set.

“For me, playing a mom in any movie with any story, I’m always wanting to get a little bit involved with the kids and figure out how much they understand or if they’re just showing up and saying their lines which sometimes happens,” Watts said.

“Obviously, this one being deeply psychological, it was important even more so.”

They’d play word games in between takes and sometimes even take a break to have a nerf gun fight or play football on the property with various craftspeople, trying to keep the air light during some of the more intense scenes.

But it was a challenge, even for Watts, who constantly worried about their well being and whether or not they were just putting on a brave face. During one particularly brutal scene involving water, Watts asked to stop frequently.

“It was not an easy process all of the time,” Watts said.

“Once you’ve finished the scene, I think that’s when you’re really like, okay, I’m done,” he said.

“And then you can really, you know, feel less stressed with the scene and then, you know, then you’re more relaxed.”

Sobel decided to keep the big twist from his young stars until they were ready to film the final scenes.

He remembers it being an upsetting moment for everyone when he and screenwriter Kyle Warren told them what was going to happen.

“For the majority of our production, they had a script that ended on page 85 and then said ‘to be continued’,” Sobel said.

“I remember in the moment, all of us being quite shocked about how raw that was for them.”

Now, the Crovettis are excited for audiences to have a similar experience.

“It’s one of those movies you really need to, after watching it, watch it again,” Cameron Crovetti said.