Adriana Elcira Rivas Gonzalez, now in her late 60s, has been fighting extradition since being arrested by Australian authorities in February 2019.

She is alleged to have been a member of dictator Augusto Pinochet’s feared secret police in the 1970s and is wanted in connection with the 1976 disappearance of senior Communist Party official Victor Manuel Diaz Lopez.

United States (US)-backed Pinochet, who died in 2006, toppled the democratically elected socialist government of President Salvador Allende and presided over thousands of murders, tortures and forced disappearances as Latin America was ravaged by Cold War-fuelled violence.

Australia’s Federal Court yesterday dismissed an application by Rivas to review a lower court judge’s 2020 decision that she should be sent to Chile to face the kidnapping charges.

“The applicant is eligible for surrender… in relation to the seven counts of aggravated kidnapping… for which her extradition is sought,” Justice Wendy Abraham said in a judgement.

Rivas, who was also ordered to pay the state’s legal costs, may yet appeal the decision.

Chile formally requested her extradition in 2018 from Sydney, where she had been working as a nanny and a cleaner in the city’s Bondi area.

Rivas has lived in Australia for three decades and was previously arrested while visiting Chile in 2007, but later fled to Australia while on bail.

According to Chilean human rights archive Memoria Viva, “La Chani” – as Rivas was known – was once a personal secretary to notorious secret police boss Manuel Contreras and was later linked to the infamous Lautaro Brigade death squad. 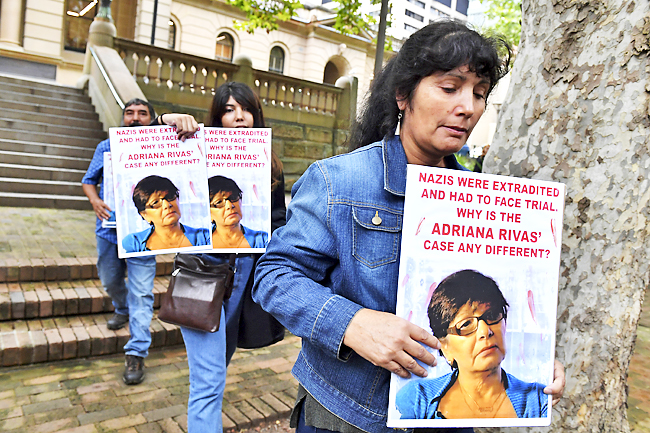