BERLIN (AFP) – Julian Nagelsmann (pic below) is top of the German media’s list of contenders to become the next head coach of Bayern Munich in the wake of Hansi Flick’s shock announcement that he wants to leave the club world champions.

Despite steering Bayern to the treble by winning the Champions League last season, Flick sent shock waves through German football on Saturday by revealing he wants to be released from his Bayern contract, which runs until 2023, at the end of the season.

Flick would only say “the reasons remain internal for now”, but simmering tensions with Bayern Sports Director Hasan Salihamidzic over recruitment and squad planning are believed to be a factor.

“It is a great relief for him to have communicated this officially,” former Bayern captain Lothar Matthaeus and TV pundit told Sky on Sunday.

“There was no other way to solve it (the tension between Flick and Salihamidzic), the cloth had been cut.” 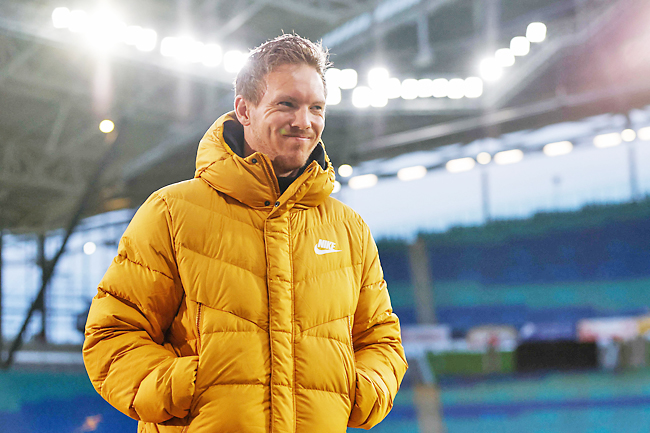 Matthaeus remains convinced Leipzig coach Nagelsmann will replace Flick next season, but last Wednesday the 33-year-old insisted “there were and are no conversations” between him and Bayern.

German daily Bild also has Nagelsmann, whose Leipzig contracts runs until 2023, top of their list.

His name reportedly came up in discussions between Bayern and Leipzig bosses during the transfer negotiations over defender Dayot Upamecano, who joins Munich next season.

Other names linked are ex-Bayern captain Mark van Bommel, who last coached PSV Eindhoven until December 2019, and current Ajax coach Erik ten Hag, who was in charge of Bayern’s reserves from 2013-15.

Flick dropped his bombshell after Saturday’s 3-2 win at Wolfsburg left Bayern on the verge of a ninth straight Bundesliga title.

Winning the Bundesliga would be the seventh title Bayern have won during Flick’s 18 months in charge.