MELBOURNE (AFP) – Rafael Nadal (pic below) pronounced himself fit and ready yesterday to produce some magic to entertain “suffering” tennis fans around the world as they cope with the coronavirus pandemic.

The Spanish great, who can move past the injured Roger Federer’s 20 Grand Slam titles with victory at the Australian Open beginning February 8, kicks off his season representing Spain at the ATP Cup from tomorrow.

He will take to the courts of Melbourne Park after completing 14 days of quarantine in Adelaide, where he was allowed to train for up to five hours a day before an exhibition on Friday against US Open champion Dominic Thiem.

“For me personally, preparation has been positive,” said Nadal.

“I have been able to practise around two hours per day in Adelaide. Some days a little bit more, two hours 15, two hours 20. That’s it. 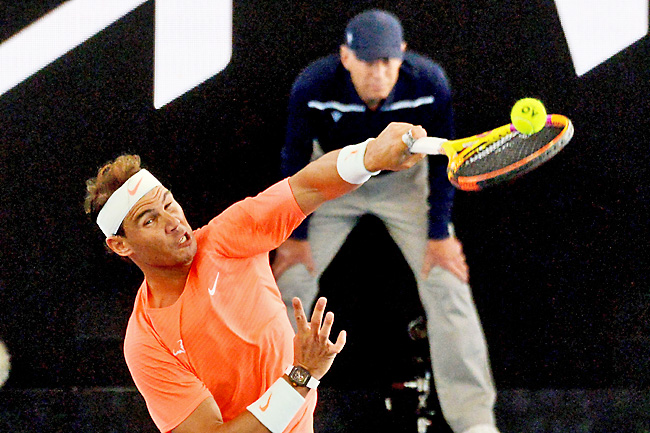 “I did, I think, the things that I had to do to be ready. Now is the moment to start playing and practising with other colleagues and let’s see what’s going on.”

Most players are now out of quarantine and the world number two is keen to get the focus back on tennis, although his thoughts are with those in lockdowns around the world.

“When we arrived here, we have this quarantine. But I think that’s over. Is the moment to start talking about tennis,” he said.

“That’s why we came here: to play tennis, to try to give to the fans around the world and to the fans here in Australia.

“For some of the people who are suffering a lot at home, we try to have good entertainment for them. The only way to make that happen is to go on court, try our best.”

He leads Spain in the ATP Cup, desperate to make amends after being beaten in the final at Sydney last year by Novak Djokovic’s Serbia.

Nadal, who doesn’t usually play the week before a Grand Slam, said it was a different experience this year, with the tournament cut to 12 teams from 24 and all games in Melbourne immediately before the Australian Open.

“It’s a very unusual situation for most of us. Most of you that are around tennis know I never play the week before a Grand Slam,” he said.

“So is a little bit new and is a strange situation. But here I am, the same like the rest of the team, to try our best in every moment.

“Because we are a team, and a good team, with great players, we have different options. Everybody’s ready to play, and to play with very competitive level.”