Nadal ready ‘to die’ to return to his tennis peak

TURIN, ITALY (AFP) – Rafael Nadal (AFP pic below) said he is “going to die” trying to return to the level of tennis that saw him capture a record 22 Grand Slam singles titles after his hopes of a first-ever ATP Finals title and becoming year end world number one were extinguished on Tuesday.

The 36-year-old Spaniard fell 6-3, 6-4 to Canada’s Felix Auger-Aliassime in Turin to follow up on a defeat by Taylor Fritz on Sunday.

To stay alive in the finals, Nadal needed Fritz to beat Casper Ruud in straight sets on Tuesday.

But when Ruud won a set against Fritz, it meant a sharp exit for Nadal and also that his teenage compatriot, US Open champion Carlos Alcaraz, would finish the year as the top-ranked male player. Ruud went on to beat Fritz 6-3, 4-6, 7-6 (8/6) to book himself a semi-final berth, while Fritz plays off with Auger-Aliassime on Thursday to determine which player goes through to the last four.

Nadal needed to win the year-end title for the first time in his trophy-laden career to have a chance of preventing Alcaraz from finishing number one.

“I mean, I don’t think I forget how to play tennis, how to be strong enough mentally,” said Nadal, who was playing in just his third singles match since the US Open in September.

“I just need to recover all these positive feelings and all this confidence and all this strong mentality that I need to be at the level that I want to be.

“And I don’t know if I am going to reach that level again. But what I don’t have any doubt, that I going to die for it.” 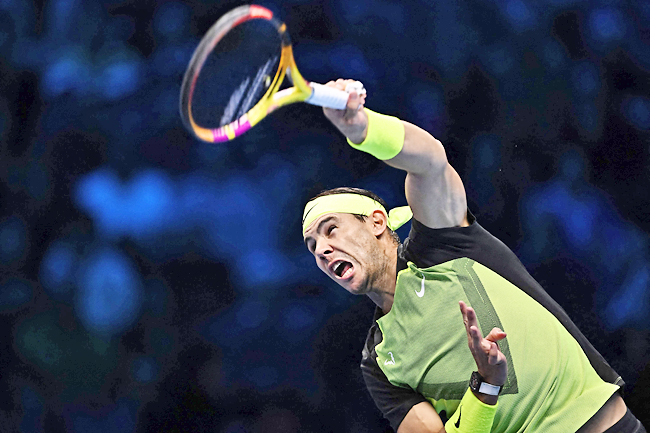