BANGKOK (AFP) – Myanmar’s ruling junta has moved to restrict political parties from meeting foreigners or international organisations ahead of an election expected next year.

The Southeast Asian nation has been plunged into turmoil and its economy is in tatters since a February 2021 coup which ousted Aung San Suu Kyi’s government.

The military alleged widespread voter fraud during November 2020 polls which Suu Kyi’s National League for Democracy (NLD) party won in a landslide, although international observers said the election was largely free and fair.

The junta-stacked Union Election Commission said on Friday that the country’s 92 registered political parties would have to ask for permission if they wished to meet foreign organisations or individuals.

“Political parties need to respect the law. If they fail to do so their party’s registration will be dissolved,” the commission said in a statement.

The body also accused foreign embassies and international non-governmental organisations (NGOs) of interfering in the 2020 polls resulting in fraud. 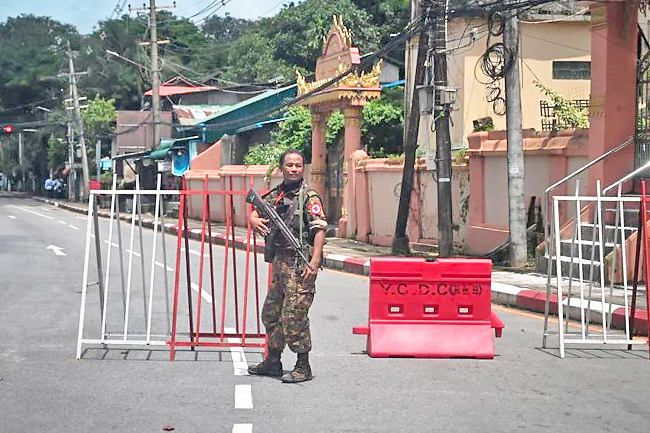 Political parties in Myanmar were scathing of the new edict.

Former NLD lawmaker Soe Thura Tun said it was undemocratic and did not respect the right to freedom of association.

“It’s not appropriate to restrict them (political parties),” he told AFP yesterday.

Chair of the People’s Party Ko Ko Gyi said the announcement was unprecedented and did not bode well for the prospects of Myanmar’s next election being a genuine exercise in democracy.

“We believe that their action will cause major damage to the Myanmar people and international community’s trust in the upcoming election and democratic system,” he told AFP yesterday.

“They can be neither free nor fair under present conditions,” he said at the ASEAN foreign minsters’ meeting in Phnom Penh, from which the junta’s top diplomat was excluded over its failure to negotiate with its opponents.

Earlier this month, the junta extended a state of emergency by six months saying elections could only take place when the conflict-wracked country was “stable and peaceful”.

It has previously said elections would be held and the state of emergency lifted by August 2023 – extending the initial one-year timeline it announced days after the coup.