THE WASHINGTON POST – I started reviewing movies for the local paper while in high school. My degree is in film. I’ve watched a lot of movies in nearly every genre – except horror. I’ve never been able to summon a desire to be terrified for fun.

Which is why Stephen Graham Jones’ My Heart Is a Chainsaw is such an accomplishment; it makes me want to watch all the horror. This novel is a paean to slasher films, a devotional about an acolyte written by an obsessive. And it’s a lot of fun.

The story follows Jade Daniels, a 17-year-old misfit who dyes her hair with shoe polish and food colouring and counts overalls and combat boots as wardrobe essentials. Her parents are absent or execrable, she has no friends, and every disappointment is “one more nail” in the coffin of Jade’s dreams. (By now, Jade sees the coffin as “pretty much all nails”).

Horror is Jade’s only solace. For her, slasher movies provide a comforting vision of order: “Everybody in a slasher cycle has a role,” she explained.

“When bodies start piling up in her small Idaho town – not just dead ones, but brutally dead – Jade’s most fervent prayer is answered: It looks like a slasher cycle is beginning. 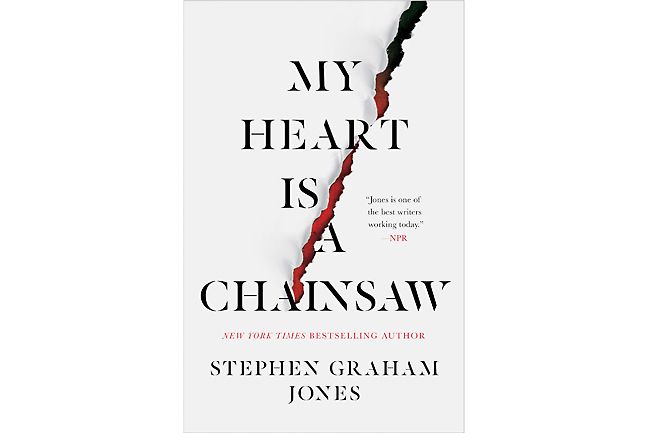 Jade’s been preparing for this her whole life. She recruits the most likely final girl – the last character standing in a slasher, typically a beautiful beacon of goodness and strength – and tries to determine who might be wreaking unholy havoc. Her investigation takes twists, turns and detours past all the genre’s signposts while pragmatic characters offer more plausible explanations for the gruesome events. It’s a neat narrative trick that creates enough reasonable doubt that we can’t quite be certain what we’re in for. Even Jade isn’t positive.

“It’s not a for-sure thing yet, she reminds herself. It can still be wishful thinking on her part. When you’re wearing slasher goggles, everything can look like a slasher.”

Jade’s awkwardness and insecurities, her intractable obstinacy, her refusal to behave in a socially acceptable manner, all make her a believable nuisance to the adults in her life, who expect “Jade to continue being the burden she already is”.

Despite all that, neither they nor we can help loving her. Though their resistance to her theories leaves her “flabbergasted to the point of no return”, she tries, tries and tries again. She’s respectful and patient, with an irrepressible sense of humour to balance her sense of horror. We’re so much on her side we find ourselves hoping for the worst.

When things get going, they really go gonzo, and we’re scrabbling to hang on by our fingernails throughout the climax. Everything promised in the first act is gleefully delivered in the third with comedy, pathos and a machete clutched in the hands of an unforgettable character.