THE WASHINGTON POST – Washing down at home isn’t an easy task, because the feathers clump up when damp.

Adding up to three tennis balls to a dryer, then tumbling a just-washed down item until it’s dry helps break up the clumps, but some often remain. To break them up, you need to run the dryer multiple times, and you might need to resort to pinching and pulling at the clumps through the fabric, which can be very time-consuming.

All About Down, a company in Seattle, has a couple of tricks that give better results. It extracts the down, puts it in a temporary case made of relatively porous fabric, then washes it to remove oils, mite remains and other grime.

The wet mass then spins in what owner Jack Sukalac describes as a “centrifuge, an industrial Electrolux machine” for considerably more time than during the spin cycle on a home clothes washer. The down emerges “more damp than wet”. Sukalac said, so when it dries, it really fluffs up.

Even if you’ve already washed your pillow, Sukalac would start by putting the down through that process to ensure it’s clean and lump-free.

Then he’d create a new case made of fabric he imports from Germany or Austria. “They do a really good job of making down-proof fabric,” he said; it’s better, though more expensive, than what is available from Asia. 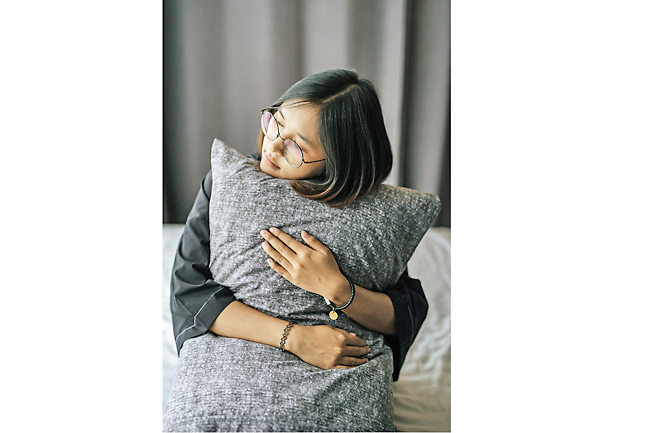 Pillow-cover fabric is no longer made in the United States (US), he said. Making fabric that down doesn’t poke through is an art that depends partly on the weave (percale or twill work best, he said), partly on the thickness of the yarn (it can’t be too thin) and partly on the finish.

Sukalac said All About Down uses fabric with an aloe-vera finish, which tightens and seals the weave.

The company charges USD20 to wash and dry a pillow with an intact cover. If the cover is soiled or has holes, as yours apparently does, the USD48 fee covers washing the down in that temporary cover and encasing it, once dry, in a new cover.

If you want down added, that costs an additional USD11 an ounce. (If you weren’t getting a new cover, the labour charge for adding down would be USD10.)

A new down pillow can cost several hundred dollars, depending on the size and other features. At Pacific Coast Feather Company (pacificcoast.com), for example, a king-size pillow ranges from USD72.99 to USD355.99. So cleaning and refurbishing makes sense financially.

But if the price is too steep for your budget, you could consider just zipping your pillow, holes and all, into a pillow protector designed for down pillows (USD24.99 for a king-size one on Amazon).

In the Washington area, for example, Parkway Custom Drycleaning (parkwaydrycleaning.com) will create a new cover for around USD35.

But the company simply adds a new layer over your old cover; it does not extract the feathers and put them in new fabric, said customer service manager Carla Thomas.

Parkway also cleans down pillows, which she estimated would cost around USD63, with a two-step process.

First, it uses dry-cleaning solvents to remove body oils, then it washes the pillow in water with soap. To dry the pillow, it adds tennis balls to a dryer.

Sukalac said he thinks his company is the only one in the country that focusses on cleaning down with soap and water. He got into the business in the 1970s, after he arrived in Seattle to go to college and went shopping for a down sleeping bag for field trips for a geology class.

One conversation led to another, and he wound up working for a store that sold outdoor equipment.

REI and Eddie Bauer each had a single store in Seattle in those days, but no one in the city repaired down items, so he volunteered and got enough business to put himself through college.

He kept his company going even after he got a master’s degree in engineering and spent 11 years in steel manufacturing. He eventually decided down cleaning was more fun and a better fit. One lesson he learned early on: Even though a pillow can be made to look and feel like new, that’s not what everyone wants. The classic case, he said, is when a wife brings in a pillow while her husband is on a trip and asks to have it refurbished. She gets it back, all clean and fluffed up with added down.

Two weeks later, the husband comes in and wants his old pillow back.

Sukalac estimates that five to 10 per cent of people prefer a pillow with crushed down. “Down is like dandelion fluff,” he said. “If you rub it between your fingers, it breaks down.” With down, he said, the result is a firmer but still malleable pillow, which people can use to support their head and neck without creating pressure points while they sleep.

To guard against unhappiness with the results, All About Down offers a one-time free adjustment on pillows it has refurbished. This covers removing extra down or the labour cost of adding more down (with the new down charged at USD11 an ounce).

Whether someone is starting with a new or refurbished pillow or just trying to keep a crushed pillow lasting longer, Sukalac recommends tumbling it in a dryer with moderate heat every three weeks or so.

This won’t remove oils, but it will combat what Sukalac said is the biggest culprit in shortening the life of a pillow: the significant amount of moisture that people perspire and breathe out each night.