Mustang: No longer a forbidden kingdom

ANN – The steep stairs that lead to the Mustang Eco Museum in Jomsom can be tiring at the altitude, but the collection it houses is equally breathtaking. Inside the museum is a glimpse into Mustang’s unique culture, divided between Thakali settlements to the south and Tibetan settlements to the north.

Most interestingly, it also houses archaeological finds that mark the trans-Himalayan region as one of the oldest human settlements not just in the Himalaya, but the whole of Nepal.

The broken shards of pottery displayed inside a glass cabinet were excavated from the famous sky caves that dot the landscape in Mustang. The museum informs the visitor that excavations have revealed human settlements existed in the region, particularly in the Muktinath valley, since 800 BCE. A chance discovery in the 1980s propelled further archaeological research, but we don’t yet know who these people were. In another section, hundreds of plant collections are displayed on the walls, along with their uses in traditional Tibetan medicine. The staff informs us that the museum also once housed a taxidermied snow leopard, but it was destroyed in the 2015 earthquake along with much of their collection after the upper floor collapsed.

The museum was finally opened to the public this year after it was shut for six years due to damage. Founded in 1992, its management was taken over by the Annapurna Conservation Area Project (ACAP) in 1997. ACAP subsequently handed over the responsibility to the local government, which in turn got a Jomsom aama samuha to take over day-to-day responsibilities.

In many ways, the museum’s current state is a reflection of how Nepali authorities have come to imagine Mustang, whose surreal landscape requires no government intervention to attract tourists, but no other effort is made to develop its potential. Many would call it the story of Nepali tourism in a nutshell. 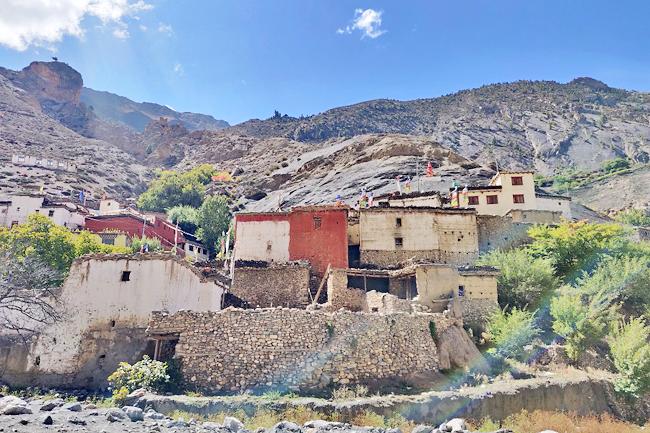 Four years ago, I’d argued that the Restricted Area Permit of USD500 that foreign nationals have to pay to enter Upper Mustang must be disbanded, since locals received little of the benefits from the fees.

Instead, the Mustang experience must be enriched by training guides on the history and cultural heritage of the region, developing alternate trekking trails that bypass the Kali Gandaki Road Corridor, and investing in ideas that preserve the fragile environmental balance of the region.

It would be sufficient to say words are winds, and the state of tourism inside Mustang remains the same as it has always been. Except, change is coming to the region – and not just because a greater number of tourists are visiting courtesy the roads.

One does not need to be a scientist to understand the dramatic impact of climate change when a woman from Tiri explains how it had rained less than usual this year, but across the Kali Gandaki in Kagbeni, there was more than usual. Similarly, when an old hotel owner in Lubra village, the only Mustang village which practices the Bon religion (which, its followers argue, predates Buddhism in Tibet), tells us how most of the younger population have shifted to the cities, leaving only the old folks and children behind in the village which currently has a population of 100, the realities of demographic shifts come to life. A road to Dolpo is under construction near Eklebhatti, and very soon, these trans-Himalayan worlds will be connected as they have never been before.

Mustang is no longer the forbidden kingdom as imagined by French adventurer Michel Peissel, although it may seem like a land stuck in time for those of us who travel there. Its culture – a remnant of the vast Tibetan civilisation that once spread across the Himalayan region – remains unique. But the region must negotiate the realities of modernity – tourism, climate change, infrastructural upgrades, and the accompanying changes – while retaining its identity and culture.