Musk will not go to G20 business meet in Indonesia: Official

NUSA DUA, INDONESIA (AFP) – Elon Musk, the billionaire new owner of Twitter, will not go to Indonesia for a business gathering on the sidelines of the Group of 20 (G20) summit, but will instead attend virtually, a senior Indonesian official said yesterday.

Musk, who also owns electric car maker Tesla, was due to speak at the so-called B20 business conference on the resort island of Bali but a court case over his 2018 pay package worth about USD56 billion in stock options is slated to begin next week.

“In regards with Elon Musk, he has a trial. He must be present at the court,” Indonesia’s coordinating minister of maritime and investment affairs Luhut Binsar Pandjaitan told reporters at the business conference on the eve of the G20 leaders’ summit.

His office said the world’s richest person would instead take part in an hour-long virtual discussion on “future disruption of global technological innovation” at the B20 today with Indonesian tycoon Anindya Bakrie. The B20 lists Amazon founder Jeff Bezos, Canadian Prime Minister Justin Trudeau and Australian Prime Minister Anthony Albanese as attendees.

Pandjaitan said Musk would visit Jakarta in December “after his issue at the court finishes”. 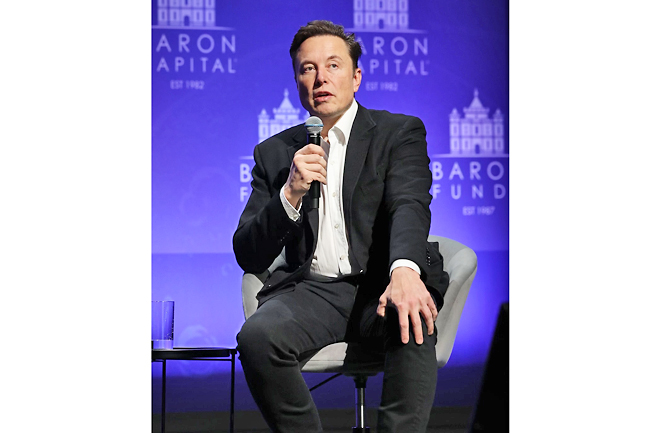 Indonesian President Joko Widodo travelled to Texas to meet Musk earlier this year for talks about Tesla investing in the country’s nickel industry.

Indonesia has the largest nickel reserves in the world, and the pioneering electric car company is reportedly eyeing them for components for its batteries.

The colossal pay packet being challenged in a Delaware court by a Tesla shareholder was approved by the company’s shareholders at the time.

But the plaintiff argued Musk as majority shareholder presided over a conflicted transaction approved by a board controlled by him and that it should be rescinded.

The case will be overseen by the same judge who last month ruled Musk must honour his multi-billion dollar buyout of Twitter.