THE WASHINGTON POST – In January, a mob erected a gallows on the grounds of the United States  (US) Capitol.

Purportedly it was to be used on Mike Pence and Nancy Pelosi, but, for many rioters, bearing their white-supremacist insignia and Confederate flags, the vice president and the House Speaker were mere stand-ins for the Black Americans whose votes largely determined the outcome of the presidential election.

In an earlier time, these aspiring lynchers would have gone directly to the source.

Their chief antagonist would have been Ida B Wells, one of the subjects of Alex Tresniowski’s thriller, The Rope: A True Story of Murder, Heroism, and the Dawn of
the NAACP.

Anyone interested in Wells’ evolution from obscure schoolteacher to civil rights icon and co-founder of the NAACP will find The Rope compelling and inspirational.

They may find it plenty upsetting, too, as Tresniowski documents harrowing incidents of mob law, including one that took the life of Wells’s close friend. 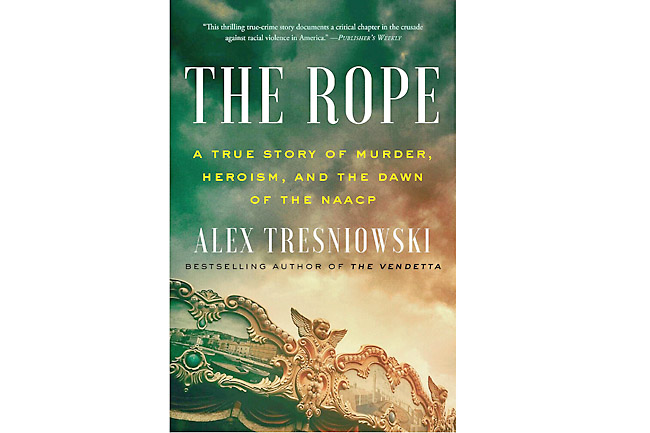 The book’s driving force, however, the thing that accelerates the page-turning, is the mystery surrounding the assault and murder of a 10-year-old girl in Asbury Park, New Jersey, in 1910.

A 10-year-old White girl, that is. It’s important to stress, too, that the crimes against Marie Smith were committed in the early 20th Century.

This was a time in our nation’s history, Tresniowski reminds us, when “the dark-hearted mentality behind slavery remained in place, not in the corners and fringes of the country but on its main streets and in its town halls and courtrooms”. That dark-hearted mentality resulted in a Black man, Tom Williams, being detained by the police in Marie’s assault and murder on scant evidence – namely that, as a day labourer, he’d done work for her family. But scant evidence for some was proof of guilt for others, requiring swift retribution.

“Up in his cell in the Asbury Park jail,” wrote Tresniowski, “Tom Williams heard the men clamouring on the street below, calling for his blood. He listened as they crashed through the outer door and barrelled into the station.”

There were more than 600 men. Standing between them and Williams were only 20 officers. Among the officers was the police chief, who, in an effort to stall the mob as Williams was being hastily smuggled out the station’s back door, “told a lie in the service of good”: The prisoner had an alibi, one credible enough to warrant investigation.

But Williams would remain a prime suspect, even as, over time, a more probable one emerged. Enter Raymond Schindler, a private detective who, like the mob that rushed the station, wielded a rope of his own.

His, however, referred to a new investigative technique whereby potential crime suspects were befriended in hopes that evidence of their guilt would be revealed.

Schindler doesn’t set out to rope Williams, however, but rather turns his sights on a shadowy White man who had been seen in the vicinity where Marie disappeared.

If so, can Schindler prove it before Williams is formally charged with the crime? Will Williams be lynched before he even stands trial?

Conflict established, Tresniowski, like all good storytellers, milks it. For the book’s duration, he slowly and meticulously dramatises Schindler using his roping technique on the White suspect, resulting in a confession, conviction and execution, and Williams’s exoneration.

To heighten the suspense en route to this outcome – and because these plotlines will ultimately converge – Tresniowski intersperses the roping scenes with key markers of Wells’ rise to prominence. The first step in her emergence was a highly publicised though unsuccessful racial discrimination lawsuit she brought against a railroad company.

“Despite the loss in court,” noted Tresniowski, “the case gave Wells something that was systematically denied black men and women in the post-Civil War South – it gave her a voice”. It was a fortuitous time to have one, for the pressing question of the day regarding her race was how to deal with its continued subjugation, often enforced by lynching.

Lynching, by Wells’ own admission, was motivated by reasons she largely misunderstood.

Like many people, she’d assumed that the practice “was irregular and contrary to law and order”, spurred by “unreasoning anger over the terrible crime of rape”.

Further, she believed that “perhaps the brute deserved death anyhow and the mob was justified in taking his life”.

The truth, she would come to learn, was that the real aims of the practice were terrorism and economic oppression. In fact, the lynching of her close friend Thomas Moss was a result of his Black-owned grocery being considered a threat to a competitor’s White-owned grocery.

Motivations such as this were all too common; Wells made this clear in 1892 when, now working as a journalist, she published an article titled The Truth About Lynching. In it she listed more than 700 lynching victims, only a third of whom had been accused of rape. The article would become, in the words of one scholar, “the founding rhetorical text in the anti-lynching movement”. It would also make Wells’s name synonymous with the cause.

Wells did not, however, have much involvement with the organisation. This was in part because of the demands of parenthood but also a result of lingering bitterness she felt about the sexism she experienced at the organisation’s inception, including from WEB Du Bois.

And yet the NAACP will forever bear her imprint, even its establishment of a legal wing intended to defend the rights of African Americans. The third case that drew the attention of that legal wing, consequentially, “involved a black worker arrested on suspicion of killing a 10-year-old schoolgirl in Asbury Park, New Jersey”.

One day in 2017, Tresniowski, having learned of this killing, wandered among the headstones in Brooklyn’s Cemetery, searching for the schoolgirl’s grave.

With the aid of the groundskeeper, he located it, marked only by a few rocks and stones. “As close to forgotten as you can get,” Tresniowski wrote of Marie Smith’s final resting place, “without having nothing or nowhere at all”.

This outstanding, meticulously researched book will serve to commemorate her stolen life, as well as the countless Black lives stolen by lynch mobs.