The riotously noisy, muddy and slightly chaotic annual tradition marks the beginning of the rice planting season – with the festival-like atmosphere in the eastern province taking place for the first time in two years.

The main event sees four pairs of harnessed buffalo gallop across a decorated paddy field, with intrepid racers sprinting barefoot through the shallow muddy waters and attempting to both control their beasts and remain upright.

“Before the race starts, we are a little excited and nervous,” said Sompong Ratanasatien, 33, drenched and breathing heavily after his latest bout. The trickiest point was the start line, he said, where racers must wait for the official start whistle as they attempt to manoeuvre the heavy beasts into position and keep them calm.

“After that it depends on our buffalo and how he matches with my skills,” said Ratanasatien, who was enjoying a winning streak with his two-year-old bovine Kao.

Urged on with a small metal-tipped bamboo whip, the usually placid animals are unrecognisable as they rampage down the watery field. Bouts are divided according to weight and size, with the heaviest creatures slightly slower to a practised eye but requiring significantly more skill to control. 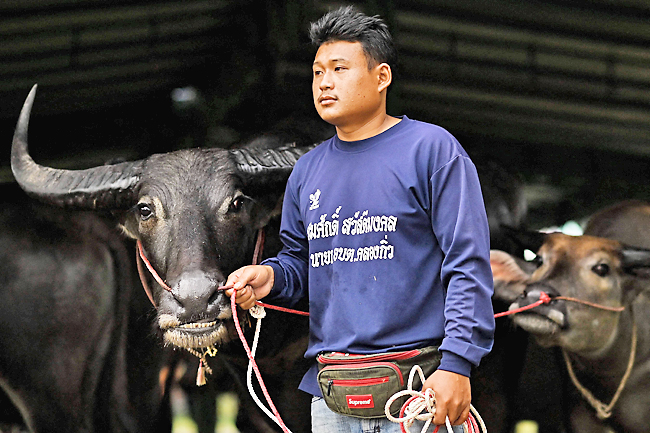 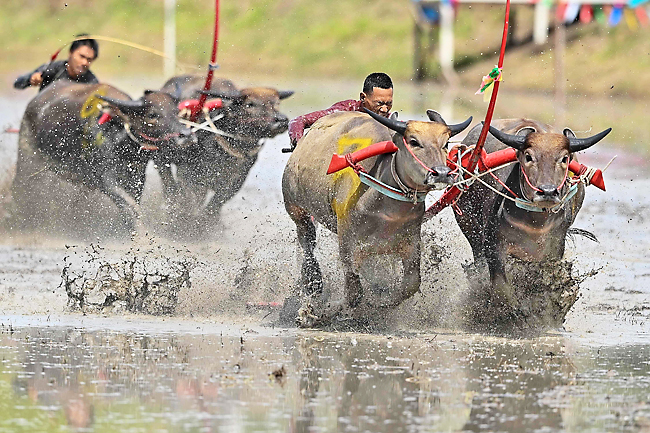 And the racers, who work and train with the buffaloes for weeks in preparation, don’t always have the upper hand.

Numerous races got off to false starts as the hapless human racers were – literally – dragged through the mud.

“I think normal people cannot do (it),” said Within Lueanguksorn, who had travelled from Bangkok to watch the races.

“There is a relation between the people and them (buffaloes),” the 38-year-old added.

The animals often looked close to careening out of control as they thundered across the finish line, scattering any spectator foolish enough to stand nearby.

“It could be a bit dangerous if the buffaloes are running too close to each other because it could cause an accident – so the riders must be careful,” he explained.

“They are over two years old, and they won the race last year,” he said, grinning ear-to-ear, adding that he trained with them every three or four days.

But there was an important point to the spectacle, Yindeesuk said. “I compete because I am trying to preserve our Chonburi traditions about good rice, good buffalo.”