With nearly 12.3 million tourists in 2019, Morocco, a Muslim country which follows Islamic laws and customs, is Africa’s most popular destination.

Home to mosques, palaces and gardens is Marrakesh, known as the Pink City in western Morocco, because its city walls and all buildings are ramparts of beaten pink clay, built by the North African Empire’s conquerors in the 12th Century.

Here, culture is like going back to the history of Ali Baba and Aladdin, donkeys, the desert, pink old buildings, hallways with the charm of architecture, said our hosts Richard Lefkowitz from New York and Santos Batiduan from the Philippines.

Before the COVID-19 pandemic, Morocco was also a favourite for educational tourism. School trips to Morocco, three-and-a-half hours from the United Kingdom (UK), include trekking on camels on Atlas Mountains, observing life and culture of ethnic Berber Village, seeing tree-climbing goats, learning how to make Moroccan argan oil from its seeds, desert camping under the stars in Sahara Desert, souk sights and sounds, as well as the taste of Moroccan mint tea.

The national symbol is Koutoubia, the largest mosque in Marrakesh, where Morocco’s name came from. The 12th Century mosque with a garden has a 77-metre minaret topped by a crane to hoist a flag to call the faithful to prayer when loudspeakers were unheard of. 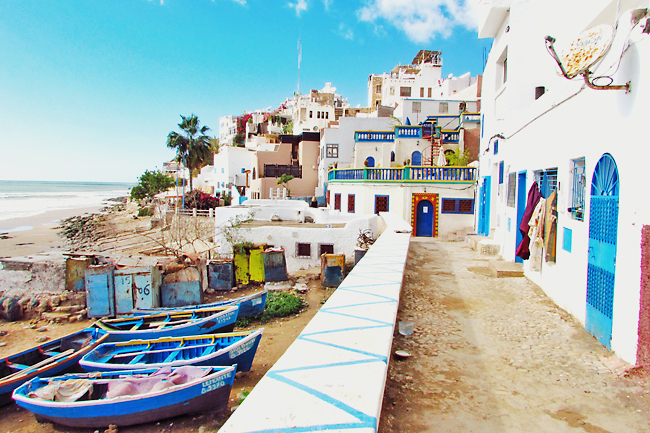 Two hundred metres away from the mosque is Africa’s busiest square, The Assembly of Trespassers or Jemaa el Fnaa, now a United Nations Educational, Scientific and Cultural Organization (UNESCO) heritage site, inside the medina, the ancient town and now a commercial area, surrounded by 18 kilometres of thick walls, ramparts and 20 gates.

Made of red sandstones, “the walls have holes to make them breathe and avoid crumbling; for scaffolding, and as a refuge for birds when it rains,” said tour guide Ahmed Bouabid.

Riads are old mansions with rooms around a gurgling fountain, garden and courtyard, and palaces within the walls of the ancient, vendors-packed medina, with maze-like alleys often not accessible by car.

This old medina follows a square plan, and so are all the kasbahs that are connected by alleyways, which seem to open to narrow streets. This rectangular road grows around an inner roofless court. What the inner court lacks in space, it compensates in height.

Palais El Roucar exudes a charm with a Moroccan architecture, layout, location and a rooftop with a 360-degree view of the Atlas Mountains (North Africa’s highest mountainous barrier along the Atlantic coast), the sunset, the surrounding riads in Bab Atlas, (15 kilometres from the Bahia Palace and El Badi Palace).

Our hosts Santos and Richard engaged the services of Bruno Melotto and Paula Trombetta, Italian architects living in Morocco, to bring in the owners’ grand vision in red: Morocco’s flag and country colour, and Richard’s favourite shade.

Out of Marrakesh and on the way to Agafay with a view of the Atlas Mountains, an hour’s drive and 30 kilometres south of Marrakesh, is this luxury camp in a stony desert, with white sand dunes.

As Teresita Abu-Alabastro recalled, “What is enchanting in this place is the romanticism of high school literature like The Little Prince, Wind, Sand and Stars by Antoine de Saint-Exupery, Bedouin Song by James Bayard Taylor, Tales of Aladdin and One Thousand One Arabian Nights. Inspired by the Great Sahara Desert, they talk of love, beauty beyond hardships of conquering the endless desert.”

“We are supposed to catch the beautiful sunset at Agafay Desert, a barren, light brown plateau with a wide rocky terrain and calm atmosphere. The camel ride starts at 5pm when the caravan arrives for riders to catch the last sun rays sinking in the Atlas Mountains. We freeze the beautiful moment before us.”

“Night falls in the camp but the silence of the night is disturbed by traditional Berber (the white-skinned, blue-eyed Moroccan natives) musicians who beat African rhythms from drums on the carpeted tent floor. Belly dancers entertain the guests as drinks flow like a river and food comes in large trays. Such a lovely magical night in this Moroccan desert,” added Mrs Alabastro.

A basket of round flattish loaf, dense and hard Moroccan bread goes with the tastiest lamb tangine – a stew with apricots, raisins, flaked almonds and saffron, cooked slowly in a shallow earthen pot with a cone-shaped lid called a tangine.

Belly dancers and a fire dance performance light up the night. Musicians beat the drums, tambourines and finger cymbals, while also lending their headgear to the tent guests who dance after dinner.

“Life is about caring, love, friendship, loyalty. Life is about family. My dad Rogelio has never been out of the Philippines. He’s 82- years-old. He took a 25-hour flight to come here from our hometown,” said Santos.

This incredible journey and charming and luxurious hospitality in Morocco starts at Palais El Roucar, steps away from the best of Marrakesh’s historic wonders. It is worth retelling as a modern Scheherazade’s tale.

There is a feeling of unmistakable intimacy in this six-bedroom boutique hotel, creating the ambience of a personal guest in a private home, rather than a hotel occupant. It speaks of culture distinguished by 300 years of history akin to its previous owners and their country, Morocco.

The hotel is part of a casbah, part of multiple buildings in a citadel, or several structures behind a defensive wall, with high walls and without windows.

The horseshoe arches are original and the cedar wood door of the big suite is found in palaces, said Limni Hassan, a Moroccan realtor and manager of working riads. He supervises up to 15 daily workers resurrecting the ancient place to a new glory.

On El Roucar’s walls are zellige geometric patterns made of small tiles, each of a simple colour, but in different and regular shapes, Hassan said.

It has three levels, including the roof terrace. The building regulations forbid constructions in the medina that are higher than a palm tree, except for the mosques and minarets. There is only one access door to the outside, usually an alley in the intricate network of the medina, and has no windows to the outside. The sunlight enters through the balconies facing the central courtyard.

All the rooms on the ground floor are facing the open courtyard, and without any windows towards the streets, designed to maximise privacy from the outside world. Tight winding stairways, illuminated with dappled lamp lighting, are tucked into the building’s corners, leading to the upper level, where private rooms are found.

This upper level has soaring archways and is lined with colonnaded galleries, serving as passages between rooms, and being covered, both the passages and the private rooms are kept usually cool considering the strength of the sun in Marrakesh. Behind each sculptured double doors, each room reveals a colour, an atmosphere, and a different personality.

As an extension of the unique personality of its owners, a New Yorker and a Filipino who both love Marrakesh, their new hotel celebrates the local flavour with a strong sense of place by incorporating locally-sourced material and reflecting the location’s heritage though colour and art.

Palais El Roucar has six bedrooms: the yellow room, red room, orange room, purple room, blue room and the suite or master’s bedroom. Each room is unique and individually decorated, incorporating intricate Moroccan architecture and beautiful Zellige tilework to bring out the room’s beauty and personality. The decor and the level of luxury of guest rooms are high end.

On the ground floor are the receiving chamber, sitting chamber, study, dining chamber, kitchen, and water closet, all around the indoor courtyard. Rehabilitation has been going on for a year. The roof and flooring were ripped off and replaced. The empty house is furnished with paintings, chairs, rugs, mirrors, and displays sourced from the medina’s flea market, open on Thursdays and Saturdays.