More than 80 Rohingya detained in Myanmar

YANGON (AFP) – More than 80 Rohingya people seeking to travel by boat to Malaysia have been detained in Myanmar’s southeast after traffickers abandoned them, a security source told AFP on Saturday.

Rohingya Muslims in Myanmar’s western Rakhine state are widely regarded as illegal immigrants in the Buddhist-majority country and have long faced discrimination, and been denied citizenship, health care and education.

The group, which included women and children, had been detained by authorities on Friday near Thanbyuzayat town in Mon state, a security source who didn’t want to be named told AFP.

“They were hiding near rubber farms after the boats which they took from Rakhine state left them,” the source said, adding that traffickers had promised to take them to Malaysia.

Malaysia is a key destination for Rohingya fleeing persecution. An investigation is ongoing, and it is unclear whether the group will face criminal charges for leaving Rakhine state.

There are also reports that a Myanmar navy vessel had found 120 Rohingya people on a boat near Mudon township in Mon state, the source said.

A Myanmar military crackdown in 2017 forced some 750,000 Rohingya to flee Rakhine state for Bangladesh following widespread accounts of murder, arson and rape. 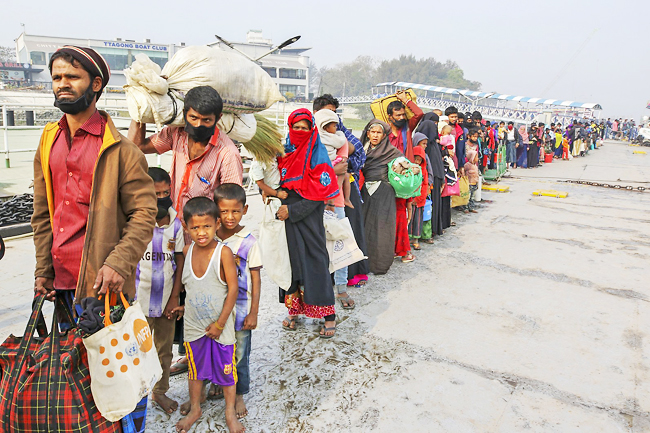