The faculty yesterday received the GIFA Market Leadership Award 2021 (Education in Islamic Banking and Finance) ahead of three other nominated institutions at the global level.

FEKIm Dean Dr Abdul Nasir bin Haji Abdul Rani in a video message for the 11th GIFA 2021 said, “It is of the highest honour, prestigious recognition and top most achievement to be awarded the third time around. This achievement serves as a landmark to UNISSA’s educational system.”

He said the recognition affirms FEKIm’s commitment to providing the best educational platform for students looking to venture in the world of Islamic finance.

Dr Abdul Nasir congratulated FEKIm’s academic team for their unwavering commitment in educating the students, and preparing them for the challenges and opportunities that lie ahead. 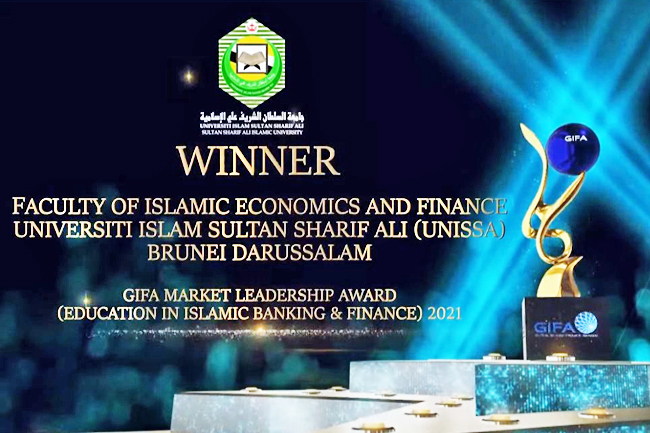 The second award was received on September 14, 2020, with the event held in Islamabad, Islamic Republic of Pakistan. The COVID-19 pandemic meant the ceremony was held online.

BILIF first received this award during the 9th GIFA Ceremony in Cape Town.

GIFA is globally recognised as one of the most prestigious and authentic market-led awards in Islamic banking and finance.

It is held annually by Edbiz Corporation, UK, which honours governments, institutions and individuals that have exhibited outstanding achievements contributing to the growth and expansion of the Islamic banking and finance industry.

It highlights and rewards those who have made great strides in thought leadership, implementing world-class initiatives, and developing industry-leading products and services on a scale of prominence and scope with depth.

During the award ceremony, BILIF Acting Chief Executive Officer Hajah Sufinah binti Haji Sahat thanked the GIFA committee, BILIF stakeholders and clients for their support and trust throughout the years.

BILIF’s mission is to shape future leaders, experts and innovators in the areas of Islamic finance and leadership through immersive programmes and worldclass events.

Since its inception in 2020 until June 2021, BILIF has conducted over 500 high-quality learning programmes and has organised 58 signature and collaborative events for more than 13,000 participants, including a new suite of virtual instructor-led training (VILT) programmes and online events.