AFP – Shazad Akbar carried his four-year-old daughter on his shoulders on Tuesday as he and his wife waded through knee-high water flooding a street in Surjani, a poor part of Pakistan’s port city of Karachi.

His wife fell sick overnight, but Akbar couldn’t take her to a doctor as heavy monsoon rains fell until morning, causing misery for the city of 15 million.

“I can only manage to come out now,” Shazad told AFP as his wife hid behind him.

The monsoon, which usually lasts from June to September, is essential for irrigating crops and replenishing lakes and dams across the Indian subcontinent, but also brings a wave of destruction each year.

This year’s monsoon is being felt hardest in cities, where poor infrastructure and services lead to clogged drains and culverts – and the collapse of the sewage system.

The result is widespread flooding, particularly in low-lying areas, and usually in poor neighbourhoods.

In Rahim Goth, a slum in the west of the city, locals were attempting to bail water from their shacks and dwellings using buckets, pots and jugs.

But their efforts appeared futile as they tipped the contents into streets already several feet deep. 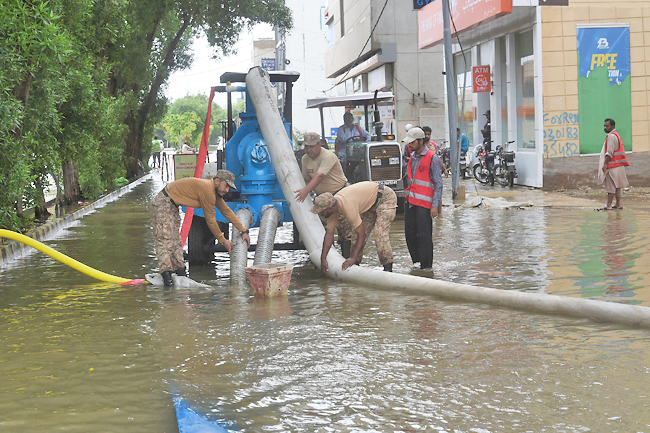 Director of the Pakistan Meteorological Department Sardar Sarfaraz told AFP an “unprecedented” 568 millimetres of rain had fallen in the city this month – nearly triple Karachi’s recent averages and more than four times that of two decades ago.

Environmentalist Arif Zubair conceded monsoons can regularly cause natural havoc, but is clear what is to blame for the worsening situation – climate change.

“(It) has engulfed all of South and Southeast Asia,” he told AFP on Tuesday.

“The recent (heavy) rains have certainly been an indicator of global climate change.”

Pakistan ranks eighth on a list of countries most vulnerable to extreme weather caused by climate change, according to the environment NGO Germwatch.

But the effects of climate change are also exacerbated by the mismanagement and negligence of authorities and policymakers, who critics accuse of being oblivious to the problems ahead.

Coastal Karachi is particularly prone to flooding because the city has expanded with scant planning on a landscape ill-suited to urban development.

“We are sitting on a climate bomb,” Arif said.

Over 300 people have died as a result of the heavy monsoon rains this year, which have also washed away more than 600 kilometres of roads and 50 bridges, according to the National Disaster Management Authority (NDMA).

It said more than 10,000 homes had been damaged – with Baluchistan province the worst hit.

In Rahim Goth, many residents have moved to rooftops to escape the flooding, stretching tarpaulin between poles to give them shelter from the incessant rain.

“People (officials) come every year to inquire about us, but every year we are doomed,” Afsari Bano told AFP as she tried to cook a family meal.

She said most of the family’s belongings – furniture, bedding and other possessions – were destroyed by flooding two years ago, and they were only just recovering.

Now she was surrounded by water in which floated soiled nappies and other garbage.

“Swarms of flies and mosquitos will follow now,” the 50-year housewife said. “If someone dies it is next to impossible to hold a funeral.”