A focus is to increase production from primary sector and downstream activities.

To achieve this, the ministry is encouraging the use of technology and set ambitious targets which will have a big impact on the nation’s economy.

“Insya Allah, with the support from the ministry and as well as farmers, fishermen, livestock breeders, the Sultanate’s aspiration to have food security and BND1 billion contributions to the gross domestic product (GDP) by 2035 is achievable,” said the minister. 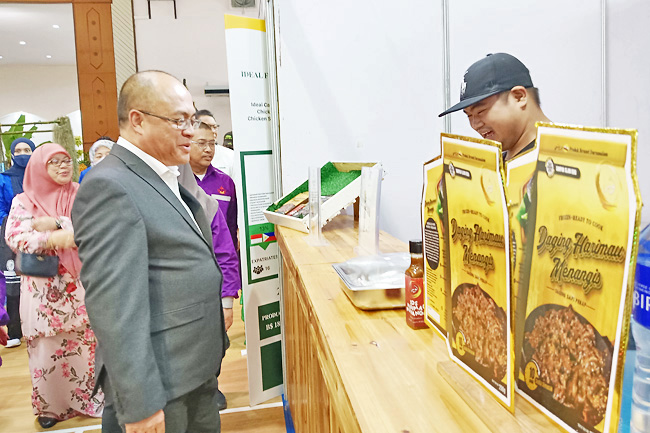 Themed ‘Empowering Value Added Product, Driver of Nation Economy’, the event is organised by the MPRT through the Department of Agriculture and Agrifood and the Fisheries Department.

Earlier, Permanent Secretary at the MPRT Hajah Tutiaty binti Haji Abdul Wahab shared that the gross production of agriculture, fisheries and agrifood sectors have increased in tonnage and value.

The Farmers, Livestock Breeders and Fishermen’s Day is aimed at giving recognition to food producers for their contributions towards a nation’s economy and producing a nation’s sustenance.

The minister toured booths set up by agencies supporting the agriculture and fisheries sectors.

There were also competitions open for public participation to rouse their interest as well as stalls selling produce from farmers, livestock breeders, fishermen and agrifood operators from all four districts.

Among them were WYWY Farm, Gropoint Sdn Bhd, Syarikat Nurishah, PDS Abattoir Sdn Bhd and KN Nursery, as well as entrepreneur Haji Sahron bin Haji Omar, who thanked the ministry for its support.

Haji Sahron was recognised for consistent production of fish over the years.

According to him, his enterprise produces three to four tonnes of fish a month and the fresh catch are distributed to Jerudong Fish Market and restaurants.

Haji Sahron said the market demand has been high, thus he and his crew, which comprises family members, are thankful that he has been granted access to all fishing zones under the Fisheries Department’s jurisdiction.

The entrepreneur also feels fortunate to be able to fund his operations, and is now pondering expanding the business by setting up a company.

Haji Sahron said he most likely needs financial assistance and plans to have a discussion with relevant authorities in the near future.

He also admitted to facing numerous challenges, and among them is weather, which can affect the size of a day’s catch.

He also shared that he has lost a friend to bad weather condition.

“Running this business is a bittersweet experience. I shall leave it to Allah the Almighty to protect me and my family,” said Haji Sahron, adding that traumas should not hinder one’s ability to earn a living.