Michelle Yeoh says she nearly gave up acting after back injury

THE STAR – In a new interview with US Elle magazine, Tan Sri Michelle Yeoh (THE STAR pic below) disclosed that she once thought of giving up acting.

This was back in 1996 when she was shooting the Cantonese movie The Stunt Woman. The Malaysian actress had injured herself during the shoot and almost broke her back. While recuperating, she thought about her future in acting.

“I was in the hospital and my girlfriends came in and said, ‘What are you doing, girl?’

You’re lying there, and you think, OK, maybe it’s time to think of something else. Do I go back to school? Do I do this or do that?” Yeoh, 60, told the magazine.

Then Kill Bill director Tarantino – who is a big fan of the actress – visited Yeoh while she was recuperating.

The Everything Everywhere All At Once actress recalled: “He came bounding down the stairs, picked up a pillow, and literally sat at my feet. Then he just went, ‘Oh my God, the movies that you do’. He can literally, frame for frame, tell you exactly what you did. I was sitting there so taken by his spirit and passion. 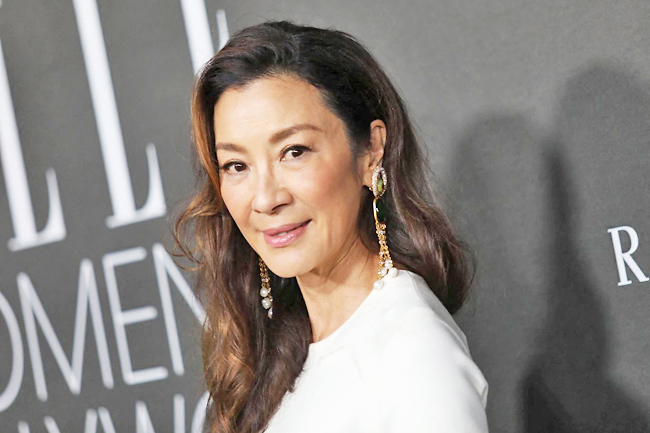 “And I thought to myself, I do love this work. I’m not going to give it up. I’ll just find ways to make it safer for myself.”

Yeoh is one of the eight women Elle chose to highlight in its annual Women In Hollywood issue. She is the only Asian in the list which includes Olivia Wilde, Anne Hathaway, Zoe Kravitz, Ariana DeBose, Sigourney Weaver, Issa Rae and Sydney Sweeney.

In the interview, Yeoh also spoke candidly about the time she arrived in Hollywood to begin a new chapter in her career more than 20 years ago.

She found Hollywood to be “insular and blinkered” back then.

“I come from Asia, from China, and in America I was told I’m a minority. It was like, ‘What?

The worst was that they seemed to not know the difference between Hong Kong and Japan, forget Malaysia’,” she said.

The Ipoh-born star said people would compliment her in her English: “They were continuously saying to me, ‘Oh, your English is so good,’ and they thought that if they spoke more slowly that I would understand them better.”

So, Yeoh said what her sassy character Eleanor from Crazy Rich Asians would probably say in such situation.

“I just started turning around and saying, ‘Well, I had a long flight coming over here from Hong Kong. It’s like a 14-hour flight. So I learned (English) on the plane’,” Yeoh said.